Attendance at religious services, but not religious devotion, predicts support for suicide attacks

When it comes to discussing suicide bombers, the controversial topic of religion is never far behind. Scholars and pundits have proposed several theories to explain why people would sacrifice their lives to take those of others, and conjectures about religious views seem easy to defend. After all, anthropologist Scott Atran estimated that since 2000, 70% of suicide attacks have been carried out by religious groups, and Islamic ones in particular. 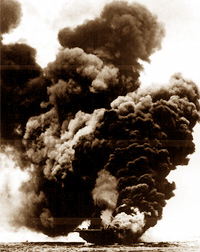 Ginges studied a wide variety of religious people from various cultures and faiths - from Palestinian Muslims to Israeli Jews, and from British Protestants to Indian Hindus. Across the board, Ginges found that a person's stance on martyrdom had little to do with their religious devotion or to any particular religious belief. Instead, it was the collective side of religion that affected their stance - those who frequently took part in religious rituals and services, were most likely to support martyrdom.

Various commentators have suggested that religious devotion makes it easier for people to buy into the ethos of suicide attacks because some religious beliefs denigrate those of other faiths, promise rewards in the afterlife or glorify the notion of martyrdom. According to Ginges, the advocates of this idea, Richard Dawkins among them, tend to bias their attention towards the more violent aspects of religious traditions or texts, in a fairly simplistic way.

An alternative idea says that the social side of religion is the more powerful influence. During religious rituals such as church or mosque services, large groups of people move or speak as one, invoking a powerful sense of shared identity. By strengthening bonds within a group, these rituals can augment a person's loyalty to that community, often to the exclusion of those outside it. Suicide attacks, which sacrifice a person's life for the sake of the collective cause, could be viewed as the extreme dark side of this cliquey behaviour.

Ginges, together with Ian Hansen and Ara Norenzayan, carried out four studies to distinguish between these two theories and they've consistently found support for the latter, across a variety of religions.

In the first, they analysed a survey of 1,151 Palestinian Muslims in 1999, which looked at their religious beliefs and behaviour, and whether they support "martyrdom attacks". Their answer had little to do with their religious devotion, as measured by how often they prayed (Ginges confirmed that people who said their religion was particularly important to them were also those who prayed most frequently). However, their attendance at mosque services did predict their support for suicide attacks. Those who attended daily were more than twice as likely to back martyrdom than those who paid fewer visits.

Seven years later and little had changed. In a more sophisticated survey of 719 Palestinian Muslim students, Ginges found the same trends. This time, each student was asked whether Islam forbids, allows, encourages or requires Muslims to killing themselves in order to kill their enemies. Again, those who attended mosque services daily were over three times more likely to believe that Islam "requires" suicide attacks than less frequent visitors. But again, devotion to Islam, as indicated through prayer, had nothing to do with their support for martyrdom. 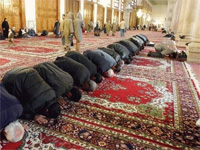 What is it about mosque services that influenced the students' views? It's possible that some clerics use services to spread anti-Israeli propaganda, but Ginges saw the same effect whether or not the students empathised with Israelis or had dehumanised them. Likewise, it didn't matter if the students supported Hamas or the PIJ, groups which most Palestinian suicide attackers have belonged to.

Together, these two surveys support the idea that it's the group ritual aspect of religion that affects support for suicide attacks, rather than religious belief by itself. But Ginges wanted more - he craved experimental support for his idea, and he wanted to see if it applied to people from other faiths. To do that, he interviewed 198 Jewish settlers living in the West Bank and Gaza. And this time, he simply put the idea of prayer or synagogues into their heads.

During the interview, he asked them either how often they prayed or how often they visited a synagogue, and later about their support for a famous suicide attack - the Cave of the Patriarchs Massacre (Israeli suicide attacks are relatively rare, so Ginges had to focus on a single incident).

The results were clear. About a quarter (23%) of the interviewees who had synagogues on their minds described the attack as "extremely heroic". However, just 6% of those who were asked about prayer did so, and an in-between 15% agreed when neither thought was planted. So priming people's brains with the very idea of a religious service made them more likely to support suicide attacks than usual, and contemplating prayer actually dulled their fervour.

For his final study, Ginges went global. He analysed surveys conducted by the BBC, looking at the beliefs of representative people from six religious groups - Indonesian Muslims, Mexican Catholics, British Protestants, Russian Orthodox Christians, Israeli Jews, and Indian Hindus. Once again, he confirmed that people who prayed more frequently were most strongly devoted to their respective creeds, and prayer was a better indicator of strength of belief than actual attendance at religious services.

Obviously, suicide attacks are rare or non-existent in many of these faiths, so Ginges looked at whether were "willing to die for [their] God/beliefs" and whether they "blame people of other religions for much of the trouble in this world". As predicted, a person's inclination for prayer had nothing to do with their answers to these questions. But overall, people were twice as likely to agree if they regularly attended a mosque, church, synagogue or temple.

This effect remained even after accounting for the different demographics and economics of the six countries, but it did vary from group to group. It was only statistically significant (unlikely to be a fluke result) for Indian Hindus, Russian Orthodox Christians and Israeli Jews. However, Ginges warns against overinterpreting these differences - obviously the six samples differed in many ways. The important point was that all of them showed a similar trend.

Together, these four studies - three survey analyses and one experiment - contradict the idea that religious belief and devotion in themselves are the driving force behind the suicide bombing mindset. Nor is this mindset exclusive to Islam, as the third and fourth experiments show. Instead, it seems that the link between religion and suicide attacks is more to do with collective rituals. Ginges's theory is that these rituals strengthen an individual's loyalty to a community, but risk hardening their hearts against outsiders. That's certainly a reasonable interpretation but it's worth noting that religious services are complicated affairs, which have many sides to them besides group behaviour. People who worship en masse may get very different perspectives on their faiths that those who pray alone don't, and this study doesn't really take that into account.

Regardless, the results are certainly interesting and consistent; the big danger is in drawing simplistic interpretations from them. The research isn't saying that people who attend religious services will become suicide bombers, or even that they're likely to. It simply implies that they are more prone to supporting the ideals of martyrdom than people who don't.

Likewise, it would be both naive and reactionary to use this study to conclude that religious services are evil and harmful. Ginges is very clear that they have a strong positive side and can build strong communities. Only rarely, and in specific political and cultural environments, does the same group-building ethos turn sour and twists into the foundation for suicide attacks.

And obviously, there are many ways for secular groups to create the same mentality, including youth groups and military parades. The Tamil Tigers of Sri Lanka are a classic example of a non-religious group that uses such methods to recruit support for suicide attacks. Indeed, it would be very interesting to see if similar studies in secular commuities would produce the same results when thinking about ideology, group activities and martyrdom.

And as a final caveat, obviously there are many other factors that affect support for suicide attacks, or intent to carry them out. Some will be religious, as examined through this study, others will be economic or political. Either way, it can only be a good thing to put this most divisive of topics under the scientific limelight.