Attacking DNA to Save Snakebitten Limbs 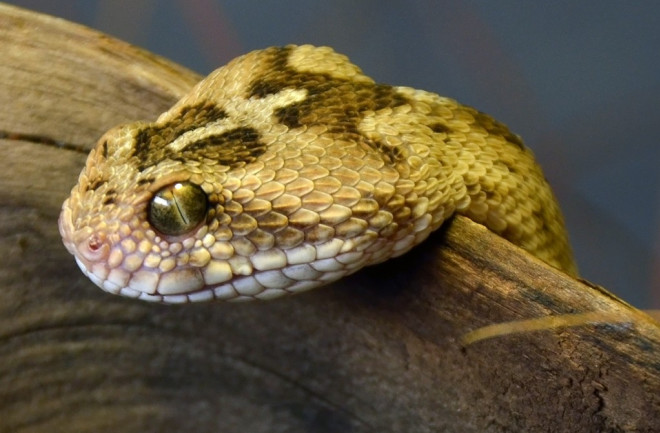 The saw-scaled viper, Echis carinatus, on display in Geneva. Photo from Wikimedia The moment a viper's venom enters the body, its enzymatic components set about their nefarious work. Metalloproteases begin the assault by mowing down structurally essential components of blood vessels and tissues, weakening walls and making holes that leech fluid. Capillaries hemmorrhage and the area swells while the proteases keep at their attack, taking out skeletal muscle through mechanisms poorly understood. Phospholipases join in, with their sights set on cell membranes. Some cut apart membrane lipids making lethal holes, while others seem to be just as destructive without enzymatic activity. The end result: muscle tissue dies. Hyaluronidases and serine proteases aid in the efforts, and the helpless tissue succumbs to the venom's siege. And that's not even the worst part. The metalloproteases and phospholipases have other tricks up their sleeves. They don't just fight their own war on our flesh: they enlist our own immune system to help them do it. The liberation of tumor necrosis factor and immune-stimulating cytokines by metalloproteases and the release of bioactive lipids by phospholipases cause immune cells to rush to the wound. Our body's forces are trained to kill, usually setting their sights on bacteria and viruses. But without those clear targets, the body's army gets confused. They can't tell friend from foe, yet the immune cells fire anyway, blindly attacking an unseen danger. Valiant volleys act as friendly fire, adding to the death toll of innocent tissues. In the sixth chapter of my upcoming book Venomous, I talk at length about necrotic venoms and the utter devastation they cause. There is a lot of focus on snakebite mortality, and rightly so, but the non-lethal burden of snakebite is too often overlooked. In many areas, antivenom use and appropriate medical care can save lives, but they don't always save limbs. The antibodies that comprise antivenoms are too big and move too slowly to effectively get to the site of the bite, and in many cases, the venom components responsible for tissue death are not immunogenic, which means there are no antibodies in the antivenom to bind them anyway. Amputations due to snakebites occur four times as often as deaths, and for people who rely on their abilities to walk or grasp to feed their families, the loss of body parts is nearly as devastating as the loss of life. Just how much necrosis from snakebite should be blamed on the snake is of the most understudied aspects of snake envenomation. There is research which suggests that shutting down our response to the venom is as important, if not more important, than actually inactivating the venom itself. For example, studies have shown that immune-quieting antihistamines like Benadryl can dramatically reduce snakebite necrosis. And now, a new study adds to the growing evidence that our bodies are to blame for snakebite necrosis: scientists from India were able to prevent necrosis in mice by taking out one of the immune system's big guns. When the immune system responds an invader, there are several cells involved. Some, like mast cells, are messengers, releasing histamine and cytokines to tell the immune system they're under attack. Those molecules cause macrophages to begin their assault. These large immune cells are the infantry of the body's army, and spend their time engulfing enemy forces in a process called phagocytosis. Once inside the macrophage, the bacteria or virus is torn apart by enzymes. Meanwhile, neutrophils ramp up inflammation, release toxins, and as a last resort, produce antibiotic-laden traps called NETs—neutrophil extracellular traps—by cellular suicide; the NETs are made using the neutrophil's own DNA. These DNA traps are very effective against living foes like bacteria, but as Kempaiah Kemparaju from the University of Mysore in India discovered, they're terrible against venoms. The NETs act as barriers, trapping the venom proteins in a small area without stopping their tissue-killing activities. Fenced in, the venom toxins go on a rampage, causing the devastating necrosis that leads to amputation.

Scanning electron microscopy showing neutrophils and their fibrous DNA NETs deployed in response to venom (black arrows). Figure 1e from Katkar et al. 2016 In a new paper published in Nature Communications, Kemparaju and his colleagues describe how these NETs worsen necrosis from the bites of the saw-scaled viper, Echis carinatus. But in addition to uncovering this tissue-killing mechanism, they outline a potential way to solve the problem: inject an enzyme designed to cut apart DNA, called a DNase. The team tested the effects of DNase on mice injected with viper venom. They found that if they injected the DNase too early, they killed the mice—those NETs keep toxins localized to the site of the wound, and if the DNAse cut them apart right away, those toxins spread through the body, causing lethal damage. But if they waited, then the DNase saved both life and limb. The results are promising, especially given the current dearth of effective treatments for snakebite necrosis. However, more research is needed before injecting DNase can be considered a viable human therapy. The issue of timing is a big one, and thus clinical trials will be necessary to determine when it's ok to begin DNase injections in people rather than rodents. More research will also have to examine whether this treatment works for all necrotic snake species, and thus is a universal therapy, or whether the saw-scaled viper's venom is mechanistically unique. Given how much venoms can vary within a species, let alone between them, it will be important for the scientists to demonstrate wide applicability of their new potential limb-saver, especially against notorious flesh-destroying species like Bothrops asper (image, if you really want to see). But the results in this species are heartening, and provide hope that someday, doctors may be able to prevent not only the 100,000 or so deaths from snakebite, but also the ~400,000 amputations, improving the quality of life for hundreds of thousands of people and their families.