At the bottom of a Japanese lake, the key to more accurate carbon-dating 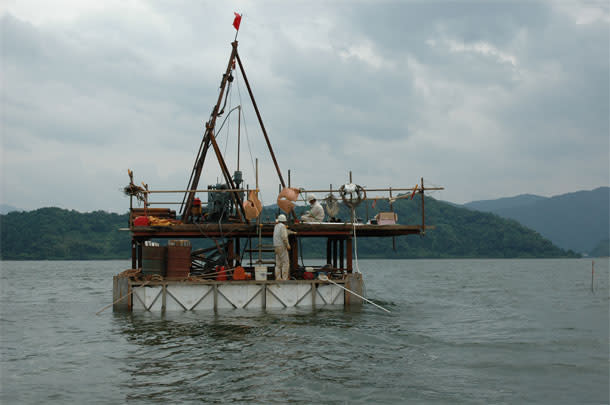 Carbon-dating is a widely used technique that allows us to gauge the age of archaeological samples from up to 60,000 years ago. But it’s not a straightforward method. It relies on a radioactive version of carbon called carbon-14, which is formed in the atmosphere and is taken up by plants (and whatever eats the plants). Once these die, the carbon-14 in their bodies decays away at a steady, predictable rate. By measuring it, we can calculate how old an ancient sample is. But there’s a catch. The levels of carbon-14 in the atmosphere vary from year to year, so scientists need some way of assessing these fluctuations to correct their estimates. They need long-running timetables, where each year in the past several millennia can be “read”, but where true levels of atmospheric carbon-14 can be measured. And now, in the bottom of a Japanese lake, scientists have found the best such timetable yet. As I write in The Scientist:

The sediment of a Japanese lake has preserved a time capsule of radioactive carbon, dating back to 52,800 years ago. By providing a more precise record of this element in the atmosphere, the new data will make the process of carbon-dating more accurate, refining estimates by hundreds of years. The data will allow archaeologists to better gauge the age of their samples and estimate the timing of important events such as the extinction of Neanderthals or the spread of modern humans through Europe. “It’s like getting a higher-resolution telescope,” said Christopher Bronk Ramsey from the University of Oxford, who led the study. “We can look [with] more detail at things [such as] the exact relation between human activity and changes in climate.”

Head over there for more.Image by Christopher Bronk Ramsey