Army Ants Help Pull Together 2 Continents and a Mystery 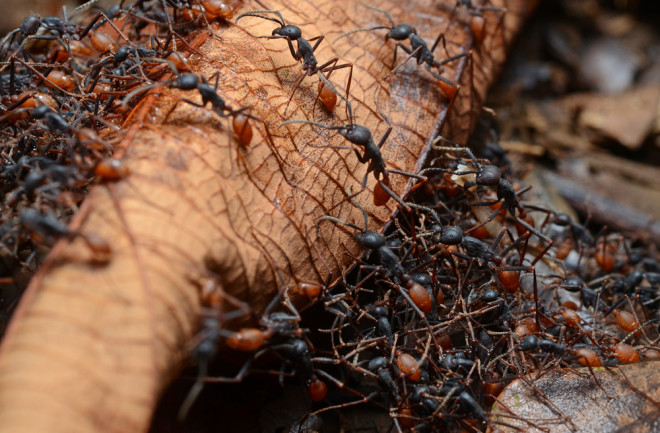 By Geoff Gallice from Gainesville, Fla. (Credit: Wikimedia Commons) Panama has had a persistent Aristotelian problem. That is to say, it’s had a long case of suffering a theory that’s prettier than it is precise. Similar to the way in which the philosopher’s declaration that heavier objects fall faster than light ones, a concept that went unquestioned and became foundational to scientific inquiry, Panama has long offered a beautiful, problematic picture of one of the greatest geological and biological events in prehistory: the rise of its isthmus. The event connected two continents, led to an unprecedented migration event, reshaped world climate, became a foundational topic — and thanks to a mineral and army ants, has just become quite a bit more complex.The Birth of a MysteryFor some time, the narrative of Panama was this: 3.5 million years ago, Central and South America collided, cutting off the Atlantic and Pacific, allowing animals from two continents to intermix. However, as Frost Sciencegeneticist and chief scientist, Eldredge Bermingham, told WIRED in response to research that came out last year, that the widely accepted 3.5 million-year-old date “was moribund way before its time” and due for a fact-check. On its deathbed or not, the research in question, which hinged on deposits of a mineral called zircon, suggested Central and South America were connected by 13-16 million years ago, not three. That was an issue. The old narrative offered a shift in ocean currents as a convenient mechanism for the alteration in global climate that led to the formation of the Arctic ice sheet. Furthermore, it had become the crux of many accounts of the Great American Biotic Interchange, or GABI. Roughly 3 to 3.5 million years ago, the Isthmus of Panama connected two continents, and flora and fauna migrated from North to South America and vice versa. But sacrosanctity and science don’t mix. New geologic evidence pointed to a more ancient story. Yet, as noted in a meta-analysis published in Science earlier this year, “evidence used to support an older isthmus is inconclusive.” However, geologic evidence is only part of the Isthmus’ tale.The Other Half of the StoryMore recent research into the GABI supports the emerging theory of an older link. Looking to an analysis published in PNAS last year, wildlife radiation saw two peaks: one from 23 to 19 million years ago, before a solid link was formed, and another from 8 to 5 million years ago, which scientist still aren’t sure about. However, looking to islands colonized by wildlife, one can see that plants and animals not normally capable of crossing water, with enough time, typically do. The fact that a complete bridge isn’t necessary to account for odd driftwood castaways, has plagued biological evidence.

The Isthmus of Panama. (By Shuttle Radar Topography Mission (SRTM) [Public domain], via Wikimedia Commons) Colonization Through MilitarismThat’s where ants come in, courtesy of a paper published last week in Molecular Ecology. When it comes to migrating animals, “most of these other species, they either had the ability to migrate through the air, or some are quite efficient at swimming,” as one participating researcher, Corrie Moreau, puts it. “You could still always invoke the exception story of ‘maybe they just swam across.’” Not so with army ants. Not only are they incapable of flight, but they reproduce through “budding,” a method wherein a new queen takes half of an old colony with her when she leaves. For the ants to island hop, “She’d have to bring all of those workers with her,” making ocean travel nearly impossible. Moreau and her colleagues used genomic methods to trace the genetic variation of various army ant species, in a campaign to map out their radiation. They found that the ants spread in two waves from South to Central America, from 4 to 7 million years ago, whereupon they became isolated, and evolved into distinct lineages. In the study of an event whose biological and geological record are both inconclusive, the ants’ travels amount to a concrete account of a more complex tale. “Most of the literature agrees that the isthmus was fully formed by 3 million years ago,” says lead author Max Winston, but prior to that, for the ants to make their first trek into Central America, the Isthmus’ rise must’ve been marked by the rise of temporary land bridges — a conclusion that supports that aforementioned spike in animal radiation 6 million years ago. Contrary to the classic image of a smooth rise, the Isthmus was, in Moreau’s words “a messy affair,” punctuated by spikes in volcanic activity that left gaps in the geological record; by castaway vanguards that ventured off into an unknown land; and by tiny, tenacious ants whose footsteps just helped pull together two continents.