Are We Loving Monarchs to Death? 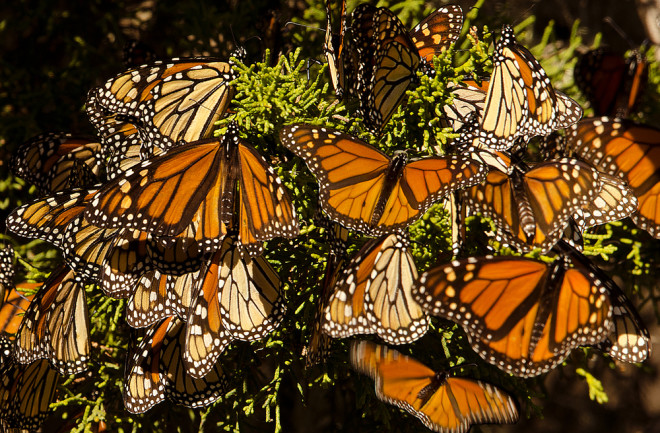 Until recently, monarchs have mostly been at Mother Nature’s mercy—contending with disease, weather fluctuations, and heavy predation in the wild.

Lately, however, the efforts of a well-meaning public to bring monarch eggs and larvae indoors to raise to maturity, or to purchase large numbers of farmed monarchs for release into the wild, may be making life even more difficult for the beleaguered butterfly. Experts suggest such activities expose monarchs to disease, interfere with its genetic diversity, and stymie scientists’ efforts to track its migration patterns. Sadly, this isn’t the first time our good intentions toward monarchs have gone bad.

“People know monarchs have been in trouble. Their numbers in Mexico have been low for the past several years,” says Sonia Altizer, director of Project Monarch Health and a professor at the Odum School of Ecology at the University of Georgia. Scientists have observed declines by as much as 97 percent of historic highs and 97 percent of long-term population averages.

According to Sarina Jepsen, director of Endangered Species and Aquatic Programs at The Xerces Society for Invertebrate Conservation, “There were highs of almost a billion monarchs—like 800 million monarchs. Currently, this last year, I think we had counted in Mexico either 120 or 150 million.”

To help boost monarch populations, more and more gardeners and armchair naturalists are removing monarch eggs and larvae from the reach of predators, raising them indoors and subsequently releasing the adult butterflies back into the wild. Still others purchase large numbers of captive-bred monarchs from commercial butterfly farms for release into the wild. Sounds helpful, right? Wrong.

“I know people who purchase monarchs and use them in outreach and education, but, if you’re buying them with the goal of, ‘I’m going to release them and supplement the population,’ there are a lot of problems with that,” says Altizer says.

These practices troubled a group of leading entomologists and conservation biologists to such a degree that they set aside differences in opinion just long enough to issue a consensus statement against the release of purchased, mass-reared monarchs from butterfly farms. They also urged individuals rearing monarchs on their own to do so only while following safe rearing protocols and participating in citizen science programs such as the Monarch Larva Monitoring Project and Monarch Health.

“There were some [conservationists] who thought people shouldn’t be rearing any [monarchs indoors.],” recalls Karen Oberhauser, a professor in the Department of Fisheries, Wildlife, and Conservation Biology at the University of Minnesota and director of the Monarch Larva Monitoring Project. “Well-meaning and smart people are going to disagree on a lot of things, and none of us has a monopoly on the truth.”

Elizabeth Howard, director of Journey North, an ongoing citizen science study of wildlife migration, notes, “I would say [the statement] could have been even stronger…. It’s such a balancing act, because all of us recognize how important the experience of raising monarchs is from a public education standpoint … Where it gets complicated is when you get into the question of how many. How many is enough? It’s the mass rearing that really raises concern.”

Most experts agree that mass monarch rearing—particularly via commercial butterfly farms—and mass butterfly releases (say for weddings, funerals, and other events) are nothing but trouble. On the topic of mass releases, famed lepidopterist Robert Michael Pyle writes, “When celebrants are misled into thinking that they are doing something ecologically acceptable, even positive, by tossing monarchs into the void at their events, they are in fact party to scientific vandalism; rather than acting ‘green,’ they are helping to undermine our ability to correctly interpret the response of wild monarchs to all the challenges they face.”

Hospice organizations across the U.S. have also adopted the practice. “The organization buys [farmed butterflies] and then they charge people to release them as part of their fundraiser. That’s why it’s becoming so embedded, because people are doing these annually now … they’re raising a lot of money,” says Howard.

“There is absolutely no educational message. In fact, if anything, there’s a disregard for what happens to the butterfly when everybody goes home,” she adds. For its part, the International Butterfly Breeder’s Association (IBBA) released its own statement in defense of mass butterfly releases.

On average, one dozen monarchs sell for about $100. A charity can then charge members of the public between $30 and $50 per butterfly, pocketing the difference. But the monarchs themselves may be paying a higher price.

Commercial butterfly farms are largely unregulated, and the quality and health of the butterflies they produce can vary widely.

“With some growers,” says Altizer, “every single one of their butterflies is heavily infected, and, with other growers, none are. I don’t want to point a blanket finger at all commercial growers, but, in general, the risk is there. We’ve found that at least half of the commercial growers that we’ve looked at have problems with disease.”

Overcrowded conditions and poor hygiene are often to blame for the spread of Ophryocystis elektroscirrha (OE), a harmful protozoan that can cause serious deformities in adult butterflies. Some affected adults may appear healthy but still spread OE to other butterflies and larvae through the release of OE spores. Whether raised in a commercial facility or by well-meaning amateurs, sick, captive-reared butterflies that are released into the wild can contaminate existing, wild monarch populations.

“One of the things that is not mentioned in [our] statement is that butterflies all fly to the same place for the winter. So, if ever you were to think of a bad situation for any sort of communicable disease, you have it right there.” says Howard.

“I think also, in terms of raising a few [monarchs] in your back yard, or many, many, many people raising a few, it’s a drop in the bucket,” she continues. “The growth in the population would only be linear in that way, whereas the risk of disease is exponential. So, in terms of a numbers game, for every monarch you’re releasing, you’re adding one to the pool, but you’re potentially introducing disease that will spread exponentially.”

Butterflies reared indoors don’t always develop the proper physiology to migrate either. They are often slightly smaller than their wild counterparts—and wings that are just a millimeter or two shorter than average can spell disaster for a butterfly on its long flight to Mexico.

“When they’re exposed to one or more of those combinations of cues, they’re more likely to enter that migratory physiological state where, instead of having developed reproductive organs and being ready to breed, their reproductive organs are actually underdeveloped … and, instead, their bodies are primed to just tank up on fat and nectar,” Altizer explains.

Instead, monarchs raised indoors may be exposed to consistently long periods of artificial lighting, constant temperatures (thanks to air conditioning), and only the choicest milkweed (thanks to the keepers feeding them) while in captivity—thereby removing the environmental cues essential for triggering that pre-migratory state.

Despite the potential pitfalls, in some instances, researchers believe it is still appropriate for individuals to raise small numbers of monarchs indoors.

“As long as [people are] rearing [monarchs] carefully, it’s not going to hurt those individuals or the population, and, if they’re reporting their data to a citizen science project, it’s going to help us understand monarchs,” says Oberhauser.

Altizer agrees, “In my mind, it’s not cut-and-dried, black-and-white where I would say people should absolutely never rear monarchs … there are some people who go to great lengths to educate themselves about hygienic rearing practices and about monarch disease, and go to great lengths to keep the conditions as natural as possible.”

Not ready to commit to a citizen science project? You can still be part of the solution for monarchs by planting native milkweed as well as nectar-rich plants and donating to organizations dedicated to monarch preservation, such as the Monarch Butterfly Fund and The Xerces Society for Invertebrate Conservation.