Are there aliens worth saving? 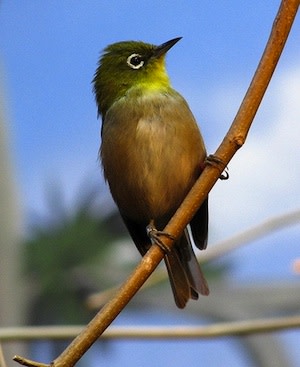 Behold the Japanese white-eye, considered an invasive species in its new home in Hawaii. Yet the bird does something that conservation biologists might considered useful for sustaining ecosystems: it spreads the seeds of native Hawaiian plants. Get rid of the Japanese white-eye, and you get rid of its service. In Yale Environment 360 this morning, I take a look at a controversial proposal that's making its way into the peer-reviewed biology literature: some introduced species are actually beneficial. I wrote about the complicated relationship between non-native species and biodiversity a couple years ago in the New York Times. In my new article, I focus on two new papers (here and here) in which scientists are advancing these ideas further. Reconsidering exotic species is just one part of a bigger vision they're offering: in a human-dominated world, we will often have to give up the idea of restoring ecosystems to a pre-human state; instead, we should focus on ensuring the ecosystems are as resilient as possible, because they're going to be facing even tougher times in years to come. As one of the scientists say, the idea is now edgy, but not nuts. Not nuts, maybe, but certain one that continues to draw the ire of many critics, some of whom I interview in the article. Check it out.[Image: Tristan Shears/Flickr via Creative Commons]