Some species consume or bury the dead, while other animals protect and carry bodies for days. Researchers are trying to interpret the behavior. 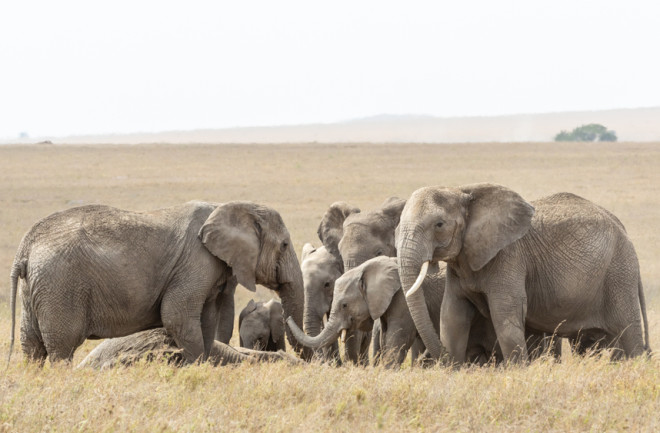 We humans are prone to anthropomorphize animals, or ascribe human thoughts, feelings and motivations to their behaviors. Often, our focus is on the cute behaviors: how animals play and love. But death is a constant specter of life, and we have been fascinated for centuries about how it affects animals. Even Charles Darwin wondered if animals recognized death and mourned death.

So, do animals understand what death is? Do they mourn as humans do when a loved one dies?

These questions can be hard to answer, in part because they are sometimes entangled. “It’s a very different question to ask whether animals understand death and whether they can grieve,” says Susana Monsó, a philosopher and ethicist at the Spanish National Distance Education University who specializes in animal minds. Her book, Schrödinger’s Opossum, explores how animals understand death. Monsó finds that some scientists insist an animal must understand death before grief can occur. But she says grief ultimately stems from “an intense feeling of missing” an individual. This loss also can occur when individuals are merely separated. If we insist that understanding death is a requisite for grief, we may misunderstand mourning in animals.

Another difficulty is that animals can’t verbalize their internal emotions. Luckily, the concept of grief “is something that you can actually parse into smaller things such as behavioral responses,” according to chimp researcher André Gonçalves of the Primate Research Institute at Kyoto University in Inuyama, Japan. These include the measurable changes in behavior that occur after a death: decreased appetite, sleeping disturbances, decreased sociality and increased stress. An animal displaying these behaviors could be mourning as we understand it.

Of course, the mere presence of these behaviors doesn’t always mean an animal is mourning. Careful empirical research can help separate stimuli responses from true mourning. Take termites, for example. Some species either bury or consume a dead termite depending on the body’s chemicals, which shift as the body decomposes. Ants also display corpse burying behavior triggered by oleic acid. In fact, covering a living ant with oleic acid triggers other ants to place it in the colony’s so-called graveyard, even as the ant continues to move. In these social insects, burying is likely just a response to a chemical cue.

It’s also unclear if corvids mourn in the human sense of the word. When corvids like crows, ravens and scrub-jays come across a dead individual, they will begin calling, and other corvids will appear. This creates a large aggregation of corvids around the dead body, which could be construed as a funeral of sorts. However, this funeral-like behavior may have nothing to do with grief or mourning. Some scholars suggest it instead allows corvids to gather information about potential dangers, as they subsequently avoid the area where a body was found. The brains of crows presented with a crow’s dead body also demonstrate a lack of activity in the amygdala, the brain region that plays a role in social memory. This suggests crows do not reminisce about their old friend when they see a dead body and are unlikely to be mourning at these gatherings around the deceased.

So what animals do likely mourn? According to Monsó and Gonçalves, the most likely candidates are those that form social bonds. Three animal groups that are commonly cited are cetaceans, elephants and non-human primates.

Cetaceans (whales, dolphins and porpoises) are known to show interest in and care for dead individuals. Adults sometimes keep dead bodies afloat or carry them on their backs or mouths. One study found a beluga whale mother carrying her dead calf for nearly a full week, and similar behavior in a bottlenose dolphin that delivered a stillborn calf. Most instances of body carrying are between mothers and their offspring, suggesting to some researchers that the mothers are grieving a loss. As there doesn’t seem to be a clear benefit for these behaviors, they could be a mourning response.

Elephants form strong social bonds and can recognize other individuals in their social group. When an individual dies, other elephants will repeatedly approach, touch, and investigate a dead elephant. They will also visit the body over months and years, and continue to show interest in the bones. Sometimes, elephants will stand around a carcass without touching it, suggesting that visiting these bodies is not purely for gathering information. One study also reported liquid streaming from elephants’ temporal glands (sweat glands located between an elephant’s eye and ear) as they stood around a dead individual; this reaction could be the result of elevated emotions and indicate a sense of loss and mourning.

The most prevalent mourning behavior among non-human primates is infant carrying. Chimpanzees, gorillas, geladas and Japanese macaques will carry their dead infants for hours or even days. In chimpanzees, other individuals in the social group also show interest in the corpse. Non-human primates will also show interest in dead adults, sometimes hitting or pulling the body in a way that could be interpreted as trying to wake it up. Sometimes a dead body is guarded from perceived predators. When two individuals are particularly close, the living primate may stay near the body for an extended period of time as if conducting a vigil. Some primates also return to the dead body or that general area for multiple visits.

Overall, it seems that animals who likely mourn do so in ways similar to humans. We see behavioral differences in cetaceans, elephants and non-human primates after they experience a death. These behavioral changes mirror how humans respond to loss. More empirical work is needed to say for certain if a species grieves and mourns. But for now, it appears some species that form and maintain strong social bonds might feel and mourn the absence of the deceased.