Ardipithecus: We Meet At Last 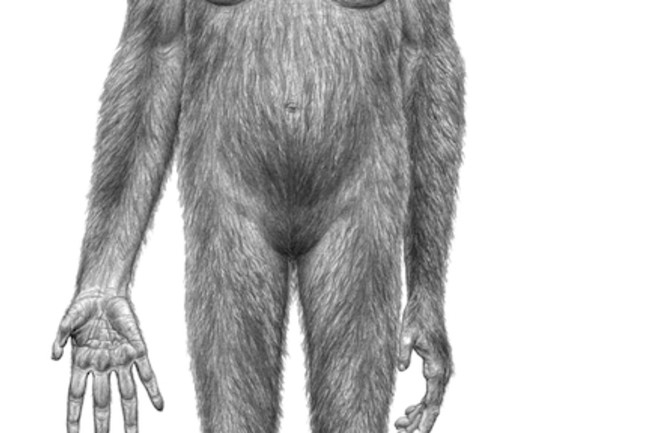 Meet Ardipithecus. This introduction has been a long time coming. Some 4.4 million years ago, a hominid now known as Ardipithecus ramidus lived in what were then forests in Ethiopia. Fifteen years ago, Tim White of Berkeley and a team of Ethiopian and American scientists published the first account of Ardipithecus, which they had just discovered. But it was just a preliminary report, and White promised more details later, once he and his colleagues had carefully prepared and analyzed all the fossils they had unearthed. "Later," it turned out, meant 15 years. I've mentioned before how unfashionable this slow-cooked style of science can be. But sometimes, it's the only way to do things right. Getting clues about HIV by observing sick chimpanzees in the wild takes years. And so does reconstructing a fossil--particularly one as delicate as Ardipithecus happened to be. Today, the journal Science has handed many of its pages over to White and his colleagues, who have filled them with lots of details about Ardipithecus, plus a couple excellent articles by writer Ann Gibbons. Ardipithecus has gone from being an enigmatic collection of bones to a new touchstone for our early hominid ancestors. To appreciate the importance of this new look of Ardipithecus, you have to step back into the history of hunting for hominid fossils. In the early 1970s, Tim White was part of a research team that found described what was, at the time, the oldest hominid known: a 3.2 million year old fossil of Australopithecus afarensis. What made their the discovery particularly spectacular was that they found it included a fair amount of a single A. afarensis individual, whom they which was named Lucy. Combined with other A. afarensis fossils, paleonthropologists got a pretty decent picture of what hominids looked like. Lucy was a chimpanzee-sized ape with a brain that was only a little bigger than a chimp's. She still had long arms and curving hands and other traits hinting that she could still climb in trees. But she also had feet with stiff, forward-facing toes, an adaptation for walking on the ground. So things stood for about 20 years. But then, with the discovery of Ardipithecus and a few other hominid fossils, the record of our ancestry got pushed back millions of years. The oldest fossil that's been identified as a hominid, Sahelanthropus tschadensis, dates back between 6 and 7 million years old. But scientists have only found pieces of the Sahelanthropus skull. Another species, Orrorin tugenensis, is 6 million years old; it's represented by little more than a leg bone. Scientists have learned a lot from these pre-Lucy hominid fossils, but before now they weren't able to make very detailed reconstructions of these creatures. Only about halfway along the journey from the first hominids to us did hominids come into full-bodied focus.

At first, Ardipithecus ramidus was yet another scrappy pre-Lucy fossil. The first report offered details about part of a 4.4 million-year-old jaw bone--a remarkable jaw bone, but just a jaw bone nonetheless. Soon after, White's team found more fossil bones, from the hominid's hand, skull, pelvis, feet, and on and on--110 pieces all told. But finding these pieces was just the start of the team's labors. They picked away at the bits of rocks surrounding the fragile bits of fossils. They used a computer to manipulate CT-scans of the fossils to figure out how crushed fragments had originally fit together as a skull or a pelvis. All this happened in strict secrecy. Some of us science writers knew a little about what the scientists were up to, but we could only guess when they'd finally finish working on the fossil. Sometimes when I'd speak to White, I'd inquire, and he'd politely say he wasn't done yet. Looking at the papers out today in Science, you can see that they've been very busy. I won't even try to offer an all-encompassing account of their new results. In many cases, it wouldn't actually be worth the effort, because these papers are just the first salvo in what will be a fascinating debate about how our ancestors evolved. I was speaking to University of Wisconsin paleoanthropologist John Hawks yesterday on another subject, and he was giddy about the papers' imminent publication. "Tomorrow's Christmas!" he said. (His young son overheard him on the phone and got very excited and confused. I had to give Hawks a few minutes to explain the nature of metaphor. Not sure how well that went over.) For now, I'll point out a few of the results on Ardipithecus that are particularly intriguing. Nice Guys With Little Teeth Those of you reading this post that have a Y chromosome have canine teeth that are about the same size as those of my XX readers. The same rule applies to the teeth of some other primate species. But in still other species, the males have much bigger canines than the females. The difference corresponds fairly well to the kind of social lives these primates have. Big canines are a sign of intense competition between males. Canine teeth in some primate species get honed into sharp daggers that males can use as weapons in battles for territory and for the opportunity to mate with females. Men have stubby canines, which many scientists take as a sign that the competition between males became less intense in our hominid lineage. That was likely due to a shift in family life. Male chimpanzees compete with each other to mate with females, but they don't help with the kids when they're born. Humans form long-term bonds, with fathers helping mothers by, for example, getting more food for the kids to eat. There's still male-male competition in our lineage, but it's a lot less intense than in other species. White and his colleagues found so many teeth of different Ardipithecus individuals that they could compare male and female canines with some confidence. The male teeth turn out to be surprisingly blunted. This result suggests that hominids shifted away from a typical ape social structure early in our ancestry. If this was a result of males forming long-term bonds with females and helping raise young, this shift was able to occur while hominids were still living a very ape-like life. Ardipithecus existed about 2 million years before the oldest evidence of stone tools, suggesting that technology was not the trigger for the evolution of nice hominid guys.

C. Owen Lovejoy of Kent State University spearheaded the studies on how Ardipithecus moved. He and his colleagues argue that its pelvis could support its upper body during bipedal walking. It wasn't a fabulous walker, and was probably a terrible runner. Nevertheless, it had some of the same anchors for muscles that we have on our pelvis, and which chimpanzees and other apes lack. Its pelvis was, in other words, a mosaic. Lucy, we now can see, represents a later step in the journey towards out own walking-adapted anatomy.

Ardipithecus's feet were mosaics too. The four little toes were adapted for walking on the ground. Yet the big toe was still opposable, much like our thumbs. This sort of big toe helped Ardipithecus move through the trees much more adeptly than Lucy. But Ardipithecus could not climb through trees as well as, say, chimpanzees. Chimpanzees have lots of adaptations in their arms and shoulders to let them hang from branches and climb vertically up trees with incredible speed. Ardipithecus had hands were not stiffened enough to let them move like chimpanzees. Ardipithecus probably moved carefully through the trees, using its hands and feet all at once to grip branches. Just a Reminder: We Didn't Evolve From Chimpanzees Chimpanzees may be our closest living relatives, but that doesn't mean that our common ancestor with them looked precisely like a chimp. In fact, a lot of what makes a chimpanzee a chimpanzee evolved after our two lineages split roughly 7 million years ago. Ardipithecus offers strong evidence for the newness of chimps. Only after our ancestors branched off from chimpanzees, Lovejoy and his colleagues argue, did chimpanzee arms evolve the right shape for swinging through trees. Chimpanzee arms are also adapted for knuckle-walking, while Ardipithecus didn't have the right anatomy to lean comfortably on their hands. Chimpanzees also have peculiar adaptations in their feet that make them particularly adept in trees. For example, they're missing a bone found in monkeys and humans, which helps to stiffen our feet. The lack of this bone makes chimpanzee feet even more flexible in trees, but it also makes them worse at walking on the ground. Ardipithecus had that same foot bone we have. This pattern suggests that chimpanzees lost the bone after their split with our ancestors, becoming even better at tree-climbing. Chimpanzees do still tell us certain things about our ancestry. Our ancestors had chimp-sized brains. They were hairy like chimps and other apes. And like chimps, they didn't wear jewelry or play the trumpet. But then again, humans turn out to be a good stand-in for the ancestors of chimpanzees in some ways--now that Ardipithecus has clambered finally into view. [Reconstructions: Copyright 2009, J.H. Matternes. Cover: Copyright 2008 T.H. White]