AIDS And The Virtues of Slow-Cooked Science 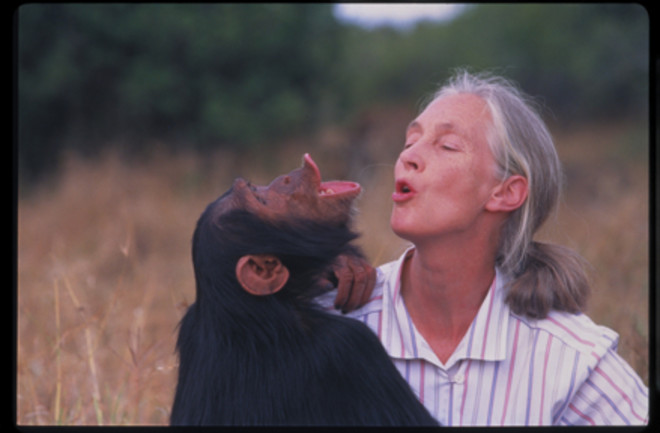 Chimpanzees get AIDS. This is an important discovery, but what intrigues me most about it is how the discovery was made. It is a story of two kinds of science, both of which are essential to getting a deeper understanding of life, but which today are staggeringly out of balance. In the 1960s, Jane Goodall carried out some of the first long-term studies on chimpanzees in the wild. Goodall made important observations, noting that chimpanzees can be surprisingly cooperative but also quite violent, with troops engaging in war-like conflicts. Goodall's research was part of a long tradition of going to where the animals are, and tracking them for years on end. Goodall didn't take giant crates of lab equipment with her to Tanzania; instead, she brought patience and careful observation. Of course, doing this sort of science poses some serious challenges. Field biologists often end up studying relatively few individual animals, because they're so hard to find. Small sample sizes always make sweeping generalizations risky. Animals in the wild are also embedded in a marvelously complex environment. They are influenced by a vast number of variables--the weather, the food supply, the latest disease outbreak, the latest kerfuffle between the top male and his younger rivals. The state of an animal at any moment may be influenced by many of these variables, making it even harder to uncover important underlying rules of its natural history. And since this kind of science takes so long, it can seem meager if you only learn about it through the papers that the scientists publish. The contrast between Goodall's kind of science and, what goes on in, say, a virology lab is enormous. Instead of just watching viruses, scientists can run experiments to test hypotheses--experiments that are controlled with exquisite precision. Scientists can genetically alter viruses to discover how each bit of its genetic material helps (or doesn't help) it infect its host. They can carefully select the hosts to infect, comparing two sets of hosts for instance that might differ only in one particular cell receptor. They can trace the virus's journey through the cell and out again; they can sequence viral genes as easily as you might crack open a fortune cookie. And they can churn out many papers a year on what they discover. The divide between these different kinds of biology has existed for decades, as I wrote in this essay for PLOS Computational Biology. That divide has led to some unfortunate biases. Natural history is sometimes treated like glorified butterfly-collecting. Meanwhile, lab-based molecular biology is sometimes seen as sterile and pointlessly reductionist. But it would be a mistake for one side to think it could live without the other. Understanding the origin of AIDS is a case in point. In 2007, an estimated 33 million people worldwide had HIV infections, and an estimated 3.1 million people were dying of AIDS-related causes every year. Yet, as diseases go, HIV is a latecomer. Scientists only became aware of it in the early 1980s, when it was still relatively rare, after which it swiftly became a global epidemic. Scientists have tried to search through medical records and blood samples for earlier cases of HIV infection that might have been overlooked. The earliest sample of HIV comes from a blood sample taken from a patient in Kinshasa, the capital of the Democratic Republic of Congo, in 1959. The mysterious appearance of HIV led to many speculations about where it came from--including accusations that vaccination campaigns introduced it into people with vaccines contaminated with a monkey virus. But when scientists reconstruct the evolutionary tree of the virus and its relatives, they can reject those claims.

As soon as scientists discovered HIV, it was clear that it belonged to a group known as the lentiviruses. Lentiviruses are small particles with spiky knobs on their surface, and they encode their genes in RNA. They infect mammals, such as cats, horses, and primates, typically invading certain types of white blood cells. Genetic studies revealed that HIV is most closely related to strains of lentivirus that infect monkeys and apes--known as simian immunodeficiency virus, or SIV for short. HIV is not actually a single lineage. It is several different strains with different origins. There are two main forms of HIV, HIV-1 and HIV-2. HIV-2, which is relatively mild, evolved from SIV that live in a monkey called the sooty mangabey. The story of HIV-1, which causes the vast majority of AIDS cases, is more complicated, as this diagram shows. (It comes from my upcoming book, The Tangled Bank: An Introduction to Evolution.) This tree reveals that it is actually several strains, all of which jumped from chimpanzees. Scientists first discovered SIV in chimpanzees by looking at captive animals. But in order to get a sense of the true diversity of the virus, they had to leave the relative comforts of laboratories and head out to the places where chimpanzees live. Wild chimpanzees don't take very well to a blood draw, so scientists developed methods for extracting virus DNA from the feces chimpanzees leave behind. But in order to find those chimp feces, you have to find the chimps (and the trees in which they spend the night). These studies showed that two subspecies of chimpanzees carry SIV, but HIV-1 has only evolved from one, P. troglodytes trogloydytes, found in west Africa around Kinshasa (marked Ptt on this tree). Goodall's central African chimpanzees, Pan troglodytes schweinfurthii, have SIV of their own (Pts).

These studies indicate that SIV evolved into HIV as hunters killed apes and monkeys to sell in a growing “bush-meat” industry. Viruses in the blood of the primates could have entered cuts in the skin of the hunters, where a few of them mutated and evolved adaptations to their new host. Knowing the structure of the HIV tree allows scientists to pinpoint those adaptations. It turns out, for example, that as all three strains of HIV-1 evolved from chimp virus ancestors, they all acquired the same new amino acid in the same position in the same protein. No strain of SIV in chimpanzees produces that amino acid. This mutation altered a gene encoding the shell of the virus, and experiments suggest that it was crucial to the success of the new HIV strains in humans. It’s possible that the mutation allowed the virus to do a better job of manipulating its new hosts into building new copies of itself. Of course, AIDS is more than just a virus. Once a person is infected with HIV, it may take years for the virus to wipe out his or her immune system, allowing a menagerie of parasites to move in. When scientists studied captive chimpanzees infected with SIV, they didn't see anything that looked like AIDS. This was intriguing to say the least. Perhaps the chimpanzees and the viruses had coevolved to a peaceful coexistence. When HIV-1 jumped to humans, its evolution took a nasty turn. But what about chimpanzees out in the real world? Do they get AIDS? That's a very short question that has taken a very long time to answer. A team of scientists set up shop at Jane Goodall's study site in Gombe National Park, and took advantage of her decades of field work to track 94 individual chimpanzees for nine years. They searched chimpanzee feces for SIV, and then kept track of the chimpanzees themselves, observing their health, their offspring, and their lifespan. When the chimpanzees died, the scientists autopsied them to see what effect, if any, SIV had on them. The results, published today in Nature, are stark. Out of the 94 chimpanzees, 17 had SIV. The SIV-infected chimpanzees had a mortality rate 10 to 16 times higher than the uninfected chimpanzees. Fewer infected female chimpanzees gave birth than uninfected ones, and none of their babies survived to a year. Pathologists found that dead infected chimpanzees looked like they had AIDS, with a lower level of immune cells called CD4+ T cells and damaged lymph tissue. This discovery raises all sorts of questions. The Gombe chimps get sick, but not as sick as humans do from HIV-1. Why? There's no evidence that SIV jumped into humans from P. t. schweinfurthii. Instead, it jumped three or more times from P. t. troglodytes. As far as anyone knows, those chimpanzees don't get AIDS. But, then again, nobody has yet published a study like the one that has just come out on the Gombe chimps. What will that study reveal, if anyone ever carries it out? Is P. t. trogolodytes the source of a recent infection of both humans and the Gombe chimps? And what's particularly interesting, to me at least, is the fact that scientists had not noticed chimp AIDS before. Robin Weiss, an HIV researcher at University College London, and Jonathan Heeney of the University of Cambridge, published a commentary in Nature in which they suggest that the artificial conditions in which captive chimpanzees live protect them from AIDS. Out in the real world, where chimpanzees face an onslaught of pathogens, infections may activate the immune system in a way that brings on the virus's attack and, ultimately, AIDS. In other words, only the slow-cooked science pioneered by Jane Goodall allowed scientists to discover one of the most fundamental facts about a virus that has become one of the most devastating scourges humanity has faced in modern history. Slow-cooked science may provide more clues in the future--but only if its value is recognized, and only if chimpanzees can survive SIV and all the other threats to their survival these days. [Goodall image: Jane Goodall's Chimpanzees]