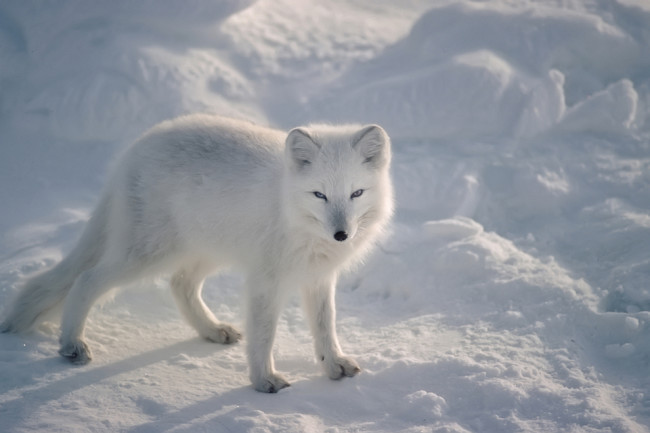 The high altitude Tibetan Plateau may be the cradle of "hypercarnivorous" evolution — and we're not talking about people who follow the Paleo diet. Based on analysis of a recently discovered extinct fox in the Himalayas, researchers suggest that the cold, mountainous plateau may have served as an evolutionary nursery for species that today populate the Arctic, more than a thousand miles to the north.

Researchers today report a new species of Tibetan fox called Vulpes qiuzhudingi, which lived 3.6-5 million years ago in the Tibetan Plateau. Analysis of the fossil indicates it has distinctly "hypercarnivorous" teeth, which means it evolved to be highly predatory rather than a more generalist meat-eater who might also have munched on vegetation. That same tooth pattern is present in the modern Arctic fox, Vulpes lagopus, but not in any other known member of the vulpine family. The Tibetan fox predates the Arctic fox by more than three million years, and the earliest ancestral lineage of the Arctic fox has not been established. So researchers argue, based on their physical similarity, it's plausible that the animal evolved in the Tibetan Plateau and then migrated north to its current polar home.Evidence of Ice Age Arctic foxes has been found throughout Eurasia at latitudes roughly halfway between the Himalayas and the animal's current range. 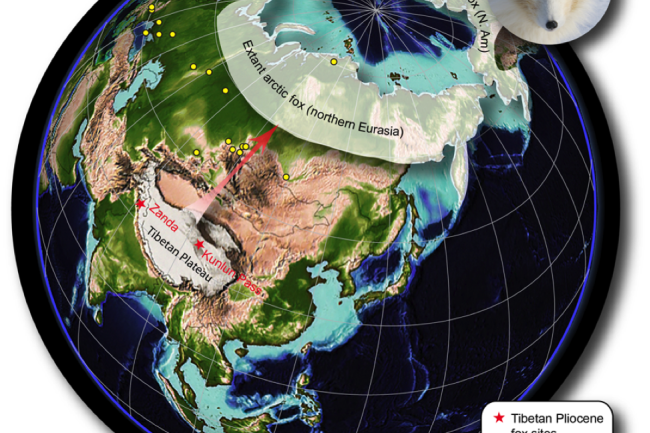 From Tibet to Arctic

Hypercarnivores — such as polar bears, gray wolves and Arctic foxes — are typical predators in the Arctic, where there are few non-animal food sources, especially during winter. In addition, the harsh Arctic climate puts high energy demands on animals that live there. Members of the team behind today's analysis

, published in the Proceedings of the Royal Society B: Biological Sciences, have previously established that the cold climate woolly rhinoceros (Coelodonta thibetana) evolved in Tibet, as well as hypercarnivorous ancestors of the snow leopard (Panthera blytheae) and the hunting dog Sinicuon dubius. The researchers therefore suggest an "out of Tibet" theory: the high altitude, low-latitude region was home to animals that adapted to cold weather extremes before spreading out through Asia and beyond — in some cases, all the way to the Arctic Circle.