Burial complex may have belonged to Alexander the Great's wife or son.

The burial complex, which doesn’t appear to be looted, was found outside the ancient Macedonian city of Amphipolis in 2012, but its entrance wasn’t located until August.

The dig has not been without controversy. Greek Prime Minister Antonis Samaras pre-empted the archaeologists in announcing the discovery.

Groups such as the Association of Greek Archaeologists have complained that the subsequent relentless media coverage, floods of tourists and increased risk of looting are compromising ongoing work at the site. 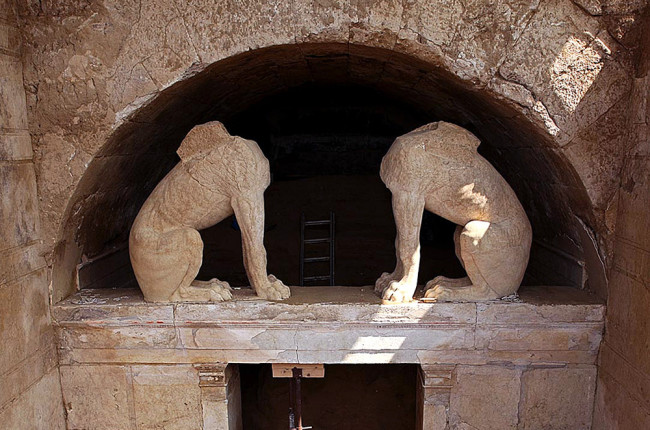 Two sphinxes stand above the tomb entrance, which was located in August. One of the heads was found in October. | HCM/Polaris

Large stone sphinxes, women sculpted in marble, intricate mosaics and multicolored frescoes awaited archaeologists in August when they entered the largest tomb ever found in Greece.

The scale of the tomb, which dates to the fourth century B.C., suggests it may belong to Roxane, wife of Alexander the Great, or their son, also called Alexander. Both were killed by political rivals after the death of the Macedonian conqueror in 323 B.C.