The water supply for up to 1 million residents of ancient Rome relied on the city's 11 aqueducts. And many more across the Roman empire used the technology. 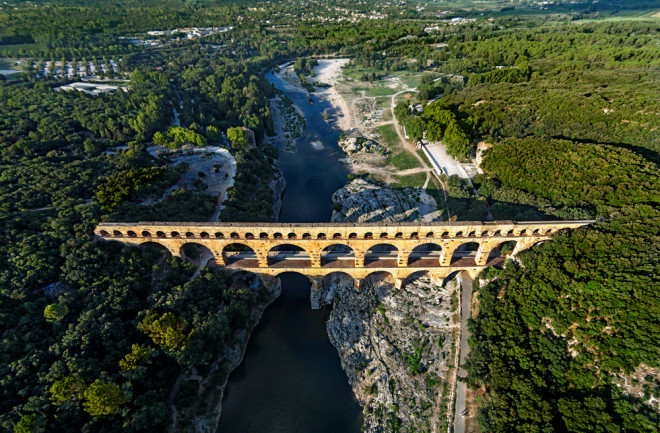 The Roman aqueduct Pont du Gard carried water through underground tunnels and over bridges like this one to reach the city of Nîmes, now part of modern France. (Credit: ER_09/Shutterstock)

Ancient Rome was a thirsty place. The city was adorned with lush gardens and dramatic fountains. Its citizens took steaming public baths and enjoyed running water delivered to their homes — and sewage carried away. Rome’s booming industries used vast amounts of water to power machinery and create goods for the city, which had a population of roughly half a million to 1 million people at its peak.

None of this would have been possible without the 11 Roman aqueducts that supplied water to the capital from the surrounding countryside. The Roman aqueducts were a crowning technological achievement of the ancient world. Rome’s first aqueduct was built in 312 B.C., and many more would be built over the next five centuries.

They didn’t invent the idea of using aqueducts to move millions of gallons of freshwater, though. The Assyrians, Greeks, Egyptians and more had all used aqueducts to supply dry, thirsty cities. But the aqueducts of ancient Rome stand out thanks to their grand scale and breathtaking architecture, which often used elevated bridges to pass water across valleys and over urban areas. In fact, some carry water even now, some 2,000 years later.

The Roman aqueduct in Segovia, Spain, is a popular tourist stop and a great example of the lifted structures that carried water across valleys and urban landscapes thousands of years ago. (Credit: Bernard Gagnon/Wikimedia Commons)

Aqueducts route water over long distances using gravity alone. For the concept to work, though, it needs to be built with staggering precision. Some Roman aqueducts slope just a foot or two per mile, according to the U.S. Geological Survey. And while their stunning, arched stone architecture may have made aqueducts famous, the vast majority of Roman aqueducts were actually built underground. Builders knew that by keeping them covered and protecting the water from sunlight, they’d avoid contaminants and stave off algae.

Roman aqueducts didn’t only supply water to Rome, either. Over the centuries, the ancient Roman empire grew to conquer much of Europe, Northern Africa and Western Asia. And as its military spread across the globe, Roman culture often replaced local traditions with its language, alphabet, calendar and technology. As a result, Roman aqueducts can still be visited across the ancient world.

The Roman era Gadara Aqueduct carried water from a swamp to 10 ancient cities in Syria and Jordan, creating an oasis in the desert. Ancient aqueducts like this mostly passed underground to protect water quality. (Credit: Pafnutius/Wikimedia Commons)

The Fall of the Roman Empire

Modern engineers still marvel at these feats, yet Rome’s emperors often had access to resources that, thankfully, aren’t common today. They wielded unilateral control of their nation and could utilize slave labor to marshal grand projects. In fact, that was part of the point. While the aqueducts may have served a practical purpose, they also doubled as a sign of Rome’s power abroad.

And yet aqueduct construction sometimes faced familiar hurdles. For example, in 19 B.C, the Roman general and legendary builder, Agrippa, was constructing a new aqueduct, the Aqua Virgo, which approached the city from the east. But as the project reached the eastern suburbs, local property owners resisted in a form of 2,000 year old NIMBYism, according to the book Rome: An Urban History from Antiquity to the Present. Agrippa was forced to divert the aqueduct to the north on a much longer course and negotiate a mix of public and private land use. Rome even went as far as appointing a key landowner along the route as the city’s first water commissioner, perhaps in exchange for his allegiance.

Construction of new aqueducts — and other projects — ultimately faded across the Roman empire in the centuries leading up to its collapse in A.D. 476. And in the centuries that followed, the aqueducts would repeatedly fall into neglect and disrepair, only to be saved by last-ditch repair efforts that kept clean water flowing to the city of Rome.

In fact, the Aqua Virgo, the aqueduct that Agrippa so carefully orchestrated, still flows through the city today. It’s a reminder of humanity’s technological prowess even in antiquity. And it shows us what’s possible with enough planning and imagination — and a bit of careful negotiation.