Anxious People Are More Likely to Walk Left When Blindfolded 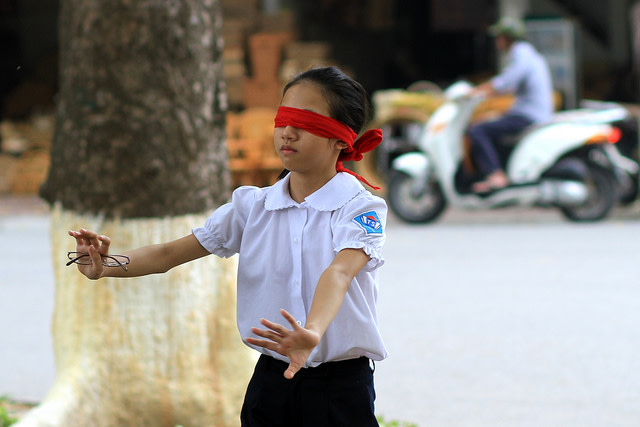 Could you walk in a perfectly straight line while blindfolded? It's lucky this skill isn't demanded often, because people aren't very good at it. Most veer a little to one side. And the direction you err in may be tied to your personality. People with more anxious personalities, for example, tend to drift left. The insight could help scientists learn where these personality traits reside in the brain. (If you're thinking that being asked to walk around blindfolded might make you anxious, yes—and hold that thought.) Mario Weick, a psychologist at the University of Kent in the UK, and his colleagues were interested in two clusters of emotions and motivations that can be used to describe someone's personality. One cluster, which psychologists call the "behavioral approach system" (BAS), involves positive emotions and pleasure seeking. The other cluster is the "behavioral inhibition system" (BIS); this involves anxiety and inhibition. Weick says the two systems work together to balance our desires and motivations. A person might score especially high in one category or the other; someone with a high BIS score would be very cautious and worried, while someone high in BAS would be driven and joyful. But you can also score high in both areas. Earlier studies have linked BAS, the more positive personality cluster, to activity in the left side of the brain. There have been hints that in certain circumstances, this activity shifts a person's attention to the right. (The left side of your brain controls the right side of your body, and vice versa.) Weick wanted to find out whether this effect would show up in a blindfolded person trying to walk in a straight line. He gathered 78 students, mostly female. Subjects filled out a personality questionnaire that would give them a score for BIS and BAS. Then they stood in an ordinary room and looked at an X on the floor, six meters in front of them. After donning "blindfold goggles" that blocked their vision, they attempted to walk in a straight line toward the X. At the end of each walk, an experimenter stopped the subjects, walked them back to the start, and let them take off the goggles and look back at the X. Then subjects walked again. Each person took 20 blind walks while a motion-capture camera system recorded his or her trajectory. (The subjects wore a marker on top of their heads for the cameras to follow.) "It was surprising for us how difficult it was for people to walk straight," Weick says. Despite their struggles, subjects seemed to enjoy the challenge. The greatest ordeal may have been for the research assistant who guided subjects back and forth, and ended up covering more than 10 miles during the experiment. It was rare for someone to end up smack on the X. Most people drifted, Weick says, sometimes right and sometimes left. When the researchers looked at all these meandering trajectories together, though, they saw some trends. More walks drifted left than right (918 compared to 621). Leftward drifts were slightly more pronounced, ending up about 34 centimeters from the target on average (rightward drifts averaged about 30 centimeters). More of the subjects ended a majority of their walks on the left (48, as opposed to just 23 who ended most walks to the right). Seven people erred left on every walk, while only one person went consistently right. Finally, the researchers compared people's walking results to their personality questionnaires. They saw that people who scored high for BIS had the greatest leftward bias. In other words, more anxious people were more likely to go left. Among people who scored especially low for BIS, those who also had a high BAS score (driven, pleasure-seeking) tended to go right. This doesn't mean your worry-wart personality has you wandering leftward throughout your life. Rather, Weick thinks the slightly scary challenge of walking blindfolded helped to activate the anxious trait cluster in people who were inherently biased that way. "We created the circumstances for differences in dispositions to emerge," he says. Although watching people's internal compasses go crooked is a fun trick, Weick says it's also "an important finding." It suggests that the cautious, worrying traits of BIS are tied to activation in the right side of the brain. This fits with previous research, Weick says. For scientists, it's one more tiny, wobbling, uncertain step toward understanding how the brain works.