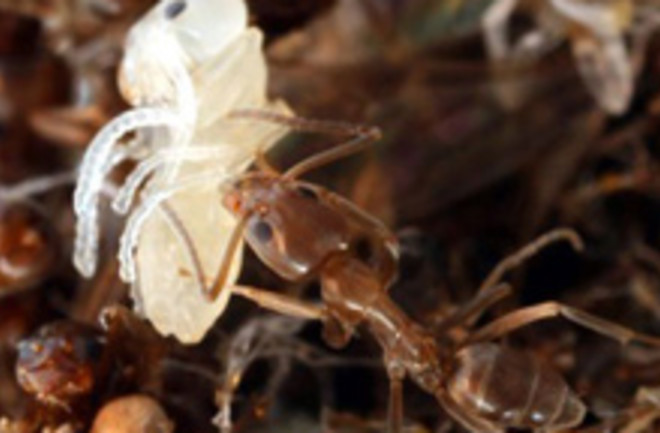 Each adult Argentine ant has two chemical fragrances that send out critical messages to other ants in its colony, in what is literally a matter of life and death. Normal, still-breathing adult workers carry chemicals signaling “Dead ant — haul to burial pile” on their outer covering, proposes [entomologist] Dong-Hwan Choe…. What prevents awkward mistakes about who’s really dead are two additional compounds also found on the covering of living ants, Choe suggests. These compounds temporarily inhibit responses to the death cues by signaling, “Wait — still alive so far,” Choe and his colleagues report [Science News].

Choe’s study, which was published in the Proceedings of the National Academy of Sciences, set out to examine the corpse-ridding behavior, or necrophoresis, that is common to many ants and other social insects, and helps maintain good sanitation in the colony…. The prevailing theory of necrophoresis had been that ants were responding to fatty acids and other chemical cues from the decomposing corpse. But the researchers noticed that ants would haul a corpse away within an hour after death — before much decomposition began [The New York Times].

In their study, the researchers weren’t able to identify the exact chemicals that serve as death cues, but they found that certain fats in live adults seemed to contain the compounds. When Choe extracted the fats from live ants and painted them onto pupae (which don’t produce the life and death chemicals), worker ants promptly hauled the pupae to the rubbish pile to join the colony’s dead.

But his team did identify two molecules, dolichodial and iridomyrmecin, that seem to override the disposal signal, preventing ants from carting one another away. The molecules are present on the cuticles of live Argentine ants, but not on insects that have been dead for more than 40 minutes [New Scientist]. When researchers painted those chemicals onto the puape, the worker ants ignored them and treated them like live adults.