Another Reason To Save Snakes: They Disperse Seeds (Probably) 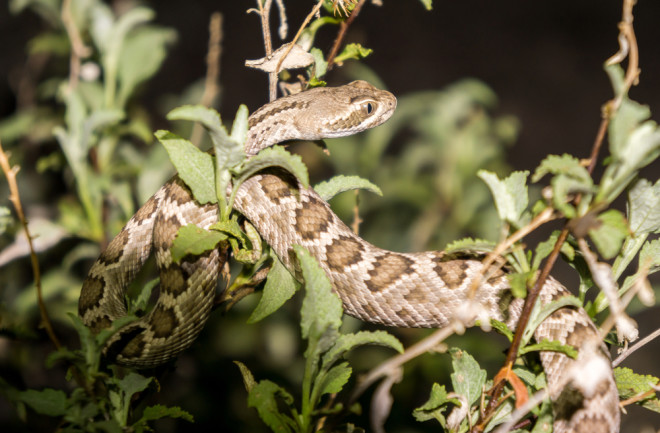 Rattlesnakes may do more for ecosystems than we ever imagined. Photo Credit: Mr James Kelley/Shuttersotck We're about a month away from the 60^th annual rattlesnake roundup in Sweetwater Texas. The event proudly calls itself the world's largest—and for good reason. Last year, nearly 8,000 lbs of snakes were killed in this barbaric slaughterfest. But there are so many reasons why this all-out assault on Texas' reptiles is a terrible idea. Rattlesnakes have complex social lives, can live for decades, and are essential to their native ecosystems. As predators, they help keep populations of mice and other small animals in check, which may ultimately help protect us from disease. And, of course, they help disperse seeds, altering the floral landscapes they slither through. Wait—what was that last one? If seed dispersal sounds less like something a snake does and more the purview of mammals and birds, that's because until now, snakes weren't thought of as seed dispersers—mostly because, well, they generally don't eat plants or fruits (at least not willingly). And their smooth scaly skin doesn't exactly give much for burs to stick to. But a new study in

Proceedings of the Royal Society B

suggests that rattlesnakes in the southwestern US may be acting as ecosystem engineers by spreading seeds.

When snakes (like this Sonoran sidewinder) eat seed-carrying rodents (like this kangaroo rat), they likely rescue and disperse seeds. Photo Credit: Wouter Kok The idea that seeds could be dispersed by snakes was first investigated over 20 years ago, when a researcher looked at what happened to seeds when they were fed to captive snakes (the fruit or seeds were tucked into the animal's regular prey). The seeds made it through various species of snakes in two weeks or less, seemingly no worse for the wear, with a few even germinating. It's possible that this happens all the time, since many snake species eat seed-eating mammals that store their bounty in their cheeks. But since that sole study, no one has looked at whether seeds naturally end up in snake intestines, or if they do, how they fare. Since gathering that data from current, wild specimens would be hard without harming the animals, scientists from Cornell University did the next best thing and examined 50 preserved snakes originally collected in Arizona and California that were being kept in the collections of the Museum of Vertebrate Zoology at University of California at Berkeley. In total, they examined the stomachs, small intestines, and large intestines of 42 sidewinders (Crotalus cerastes), 4 Mojave rattlesnakes (C. scutulatus), and 4 southwestern speckled rattlesnakes (C. pyrrhus). The snakes' GI tracts contained remnants of their last meals; prey items sat in various states of digestion in 90% of the snakes. A total of 36 rodents were identified from these remains, including pocket mice (Chaetodipus sp.) in 17 snakes, kangaroo rats (Dipodomys sp.) in 3, and a packrat (Neotoma sp.) in 1 snake, as well as various lizards.

A germinated seed (Indian Ricegrass) from the lower intestine of a rattlesnake. Photo Credit: Randall Reiserer But that was all to be expected. What was somewhat unexpected was the 971 seeds that were also found 49 out of the 50 snakes' guts. Nearly half were seeds (439) were from pinweed (Erodium cicutarium), a pretty little purple wildflower. And, despite their confinement to the serpents' GI tracts, 19 of the seeds they found had germinated—evidence that at least some of them remained viable, though the authors suspect the majority were (prior to the snakes' pickling, that is). "There was no evidence that whole seeds secondarily ingested by the rattlesnakes examined were damaged or had loss of viability," the authors explained in the paper. That's probably because, unlike more omnivorous predators, rattlesnakes cannot digest many of the tough fibers that protect seeds. And they eat their prey whole, without chewing, so seeds are unlikely to be damaged during the consumption process.

Was this little pinweed planted by a rattlesnake? Maybe. Photo Credit: arousa/Shutterstock But not only did the snakes consume seeds regularly, they may have rescued them. That's because these small mammals store seeds in their cheek pouches so they can eat them later—and when they do, the seeds don't make it. So any whole seeds that entered the snakes because they ate stuffed-cheek rodents would have likely died if the serpents hadn't intervened. And the authors speculated that, given how long it takes for some of these snake's meals to pass through their guts, the snakes would not only be able to germinate intact seeds, they could disperse them long distances. "We suspect that among the more than 3500 extant snake species described, many consume seed- and or fruit-transporting prey, and thus should be studied and appreciated as seed rescuers and secondary dispersers, perhaps even ecosystem engineers," the authors write. "Indeed, rather than categorizing snakes as strictly predators, we should initiate research on their potential roles in ecosystem services."

Just look at all those seeds in this kangaroo rat that could be saved by the right rattler! Photo Credit: Aaron Ambos