Another purge sale: autographed copies of the UK hardback edition of Microcosm 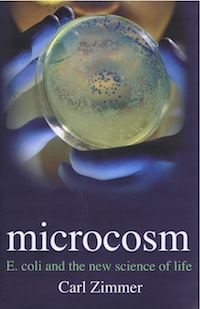 Last week I announced that I had 17 autographed copies of the US hardback edition of Microcosm, and in 85 minutes you folks cleared me out. There were a few cries of "Arg!" later on Facebook and Twitter, to which I responded that I still needed to deal with more books in advance of our house renovation. And so (voice turning crazy), here's the next deal: we've got 8 autographed copies of the British hardback edition of

Microcosm: E. coli and the New Science of Life.

It's out of print, but between now and next Tuesday, it's available for ten dollars from my Amazon store. Again, here's a quick description of Microcosm: In the book, I tilt at one of my favorite windmills--the definition of life. But rather than try to take on all of life on Earth, I chose one species--the one that we know best of all. That would be our gastrointestinal lodger, Escherichia coli, the little bug that helped build modern biology and launch the entire biotechnology industry. In my biography of this scrutinized germ, I explore the origin of life, our inner ecology, and the search for life on other planets. You can find out more about the book on at carlzimmer.com, or check out this review from Anthony Doerr in the Boston Globe, in which he calls it "quietly revolutionary." If we run out of these books, remember that the paperback and Kindle editions are still in print, and I have plenty of other autographed books to buy. And we still have too many books in the house, so more sales will be in the offing. Thanks again!