Annotated Volcano: Check Out the Craters and Lava Flows of Eritrea’s Nabro 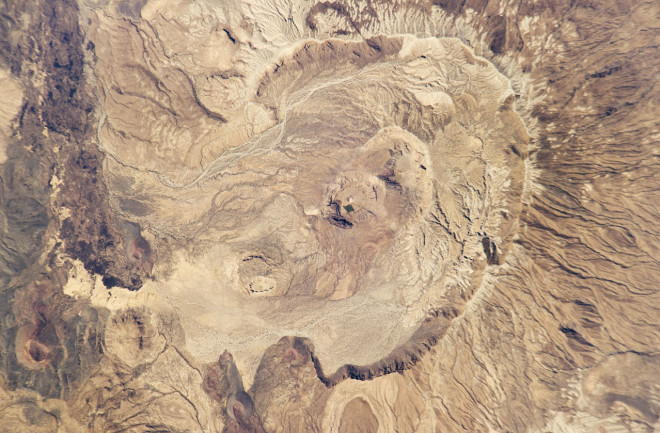 An image captured months before the Nabro Volcano erupted in 2011. (Credit: NASA)

(This is the second in my series of Annotated Volcanoes. Check out the first on Cerro el Condor)

The 2011 eruption of Nabro in Eritrea was one of the most unexpected large eruptions of the last decade. Prior to this eruption, not much was known about Nabro, mostly thanks to its remote location in the deserts north Africa at the top of the East African Rift near the Red Sea. Nabro was obviously a volcano with a colorful past as images taken prior (see below) to the June 2011 eruption show multiple calderas and smaller craters and cinder cones. However, it was unclear how much of that activitiy was geologically recent. Much like the Andes, this area is arid, so volcanic features are well-preserved. The basaltic lava flows and rhyolite domes inside the Nabro caldera could be hundreds or hundreds of thousands of years old.

We know that the volcanoes in this part of Eritrea have been historically active. Dubbi erupted in the 1860s, producing some impressive lava flows and dusted ash as far as 300 kilometers (~186 miles) from the vent. Alid may not have erupted in historic times (that we know of), but it does have active fumaroles and other geothermal features. However, there were no signs that Nabro had done much over the last few thousand years or was planning to do anything prior to summer 2011.

The two large calderas that form the Nabro edifice (nested calderas, marked in dashed line in the image above) are the likely source of thick ash deposits (ignimbrites) that surround Nabro, with the largest caldera measuring almost 7 kilometers (~4.3 miles) across. The fact that part of the caldera wall is missing to the southwest (left) suggest these could be trap-door calderas where one side of the caldera subsides more than the other. Alternatively, that wall could just be buried in debris from those caldera-forming eruptions. A smaller caldera that is the source of the 2011 eruption (but not formed in it) is younger than those first two.

Nabro is a great example of a bimodal volcano: a volcano that erupts basalt (low silica) and rhyolite (high silica) and not much in-between. This explains its history of large explosive eruptions caused by rhyolite volcanism, like what formed the large calderas, and the lava flows caused by basaltic volcanism like we saw in 2011-12.

On June 12, 2011, an earthquake swarm started at Nabro (at least one detectable from a distance as the volcano has no monitoring equipment near it). Within 24 hours of that swarm, an eruption had begun that sent a large plume over 13 kilometers (~42,000 feet) up. Needless to say, this surprised almost everyone and the eruption was originally thought to be coming from Dubbi rather than Nabro. For the next several weeks, a plume was present coming from Nabro as a long lava flow was spotted by satellite coming from the smaller caldera in nested caldera complex.

The longest lava flow from the eruption stretched over 15 kilometers (9 miles). It did encroach on the village of Sireru, but no casualties or damage to property were reported. There were some smaller lava flows (that I’ve marked on the image) that seem to come from over vents around the inner caldera. You can compare the image taken in October 2015 with one taken in January 2011 by astronauts on the International Space Station (above) and see how much changed. I marked in a solid line the extent of the dark ash fall and it shows quite nicely the effect of the prevailing winds. Some parts of Nabro only a few hundred meters from the vent saw almost no ash, but downwind the ash was seen falling hundreds of kilometers away.

Two interesting impacts of this eruption: first, the eruption was the top sulfur emitting eruption of the between 2002-2012, with over 1.5 Tg (~1.65 million tons) released. Even though this eruption was relatively small (VEI 4) compared to the massive eruptions that has made a big impact on climate, like Tambora in 1815, Nabro (with some help from other eruptions) has turned out to have an impact on the planet’s climate. Second, salt mined near the volcano has become inedible due to the ash fall from Nabro. That is not an insignificant loss considering the economic state of these sparsely-populated parts of Eritrea.

Nabro was also an eruption where satellite images of the area were essential for understanding what was happening. With its remote location and limited resources of Eritrea to get to the region, it was eyes in the sky that gave us the first information about the events on the ground.