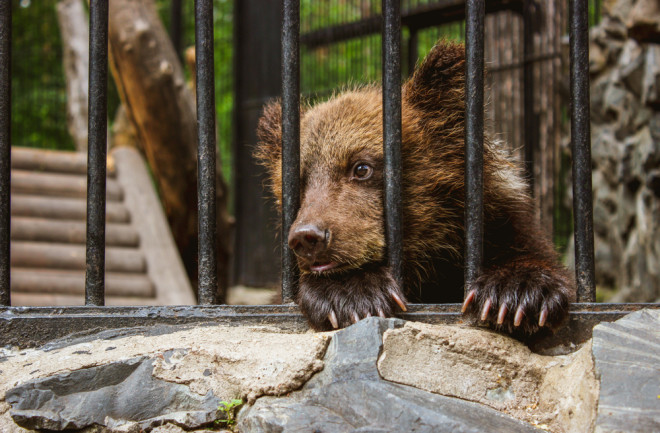 When viewing an animal in captivity, plenty of people wonder whether the creature is bored, if not depressed. It might apply to a tiger pacing back and forth in an enclosure, or a snake that rarely emerges from its little wooden tunnel in a glass box.

Unlike your pet dog or cat — species that have spent tens of thousands of years adjusting to a life of domesticity — the wolves and wildcats that our pets descended from are not equipped for that lifestyle, says Liz Tyson, programs director for Born Free USA, a nonprofit wildlife conservation group that operates a large animal sanctuary in South Texas.

“If you put a wild animal in a captive situation, they are going to be compromised in one way or another,” she says. “They’re missing out on so much complexity and all the things that make them themselves.”

At a zoo, you might see animals expressing their stress through behaviors known as stereotypies. These can present as an elephant swaying from side to side, or a bear rocking backwards and forward. Tyson says a giraffe might use its tongue to lick things obsessively and monkeys have been known to over-groom themselves or even chew off their own appendages. Studies show that the captive environment can even change the chemistry in the brain.

For context, just consider the stressful and isolating early days of the pandemic when many humans were told to shelter in place. Tyson says that while those measures were established for our own good, the anxiety or discomfort we felt in that period may be similar to what animals in captivity experience. Tyson also argues that if keeping humans in confinement is how we punish criminals, what makes it acceptable to do the same for innocent animals?

Read more: 5 Unexpected Animals You Should Care About at the Zoo

“There are many zoos that are chronically bad and should be closed down,” says Leif Cocks, former zookeeper and founder of three nonprofit wildlife conservation organizations. Others, he says, should be encouraged to evolve into something he calls “conservation parks.” Cocks once attempted to start a zoo under this conversation-park premise, beginning with orangutans.

Cocks says the idea behind that model was to give orangutans the best life possible. While for most apes that would mean living their lives in the wild, some orangutans cannot learn to survive in the wild, depending on their background. For some born into captivity, that might mean they’re better suited for a rainforest sanctuary in their home range. Similarly, orangutans that have physical or mental disabilities might do well at a zoo that prioritizes the animals’ best interests.

“The idea from a welfare perspective is that every orangutan should be in the best place that will allow them to live the best life possible,” says Cocks.

Tyson says some people argue that animals that don’t wander far in the wild might not even realize if they are living a life in captivity. However, that seldom applies to the fan-favorite creatures such as giraffes, orca whales and bears. “The ones we want to see most are the ones who suffer the most,” Tyson says.

Cocks notes that many species can’t thrive in any form of captivity, no matter how much stimulation is provided: “This can be due to their physical size or their natural social groupings not being able to be accommodated. Others are not suitable as their natural levels of activities are almost impossible to replicate.” He adds that self-aware animals such as elephants and great apes can never thrive in captivity in the same way that humans are unable to cope well in a restrictive environment.

The Future of Zoos and Sanctuaries

Cocks acknowledges that elements like veterinary science, enclosure design, diet and behavioral enrichment have come a long way in some captivity programs. But Tyson says she believes zoos have actually grown worse for animals over time.

She argues that a shift toward making the zoo experience more enriching and interactive for its human visitors has put even more stress on the animals. “Animals continue to be treated as exhibits when we know that they suffer as a direct result,” Tyson says. “In addition, we are seeing an increase in novel activities at zoos such as hands-on experiences or walk-through spaces, where people can get closer than ever before — sometimes dangerously so — to the animals held captive.”

Cocks says zoos will often justify their existence by claiming they serve as proverbial arks for animals that will assist with the extinction crisis. While this can be true for small species and some larger species, he argues it only works when there is a targeted breeding program attached to reintroducing animals into the wild. Megafauna — such as tigers, elephants, great apes and other animals that are the largest in a habitat — cannot be saved in this way, he adds.

“The expounding of the ark myth may give people a false sense of confidence that species will somehow persist in captivity, despite the loss of their natural habitat, and thus discourage them from supporting direct and immediate action to save them in the wild,” says Cocks.

Tyson says that no amount of land or money within a zoo model will replicate the healthy, supportive environment that most animals require in the wild. “It doesn’t matter how many thousands or even millions of dollars are thrown at holding animals captive,” she says. “It will never be enough to truly meet their needs.”

As an animal advocate, she suggests that zoos be phased out over time. She adds that, in an ideal world, even sanctuaries like the one she works for would not be needed, considering that the organization rescues animals from pet trades, labs and other adverse situations that should be prevented altogether.