Humans probably domesticated dogs in Asia, but some dogs also carry genes from an ancient population in the Middle East. 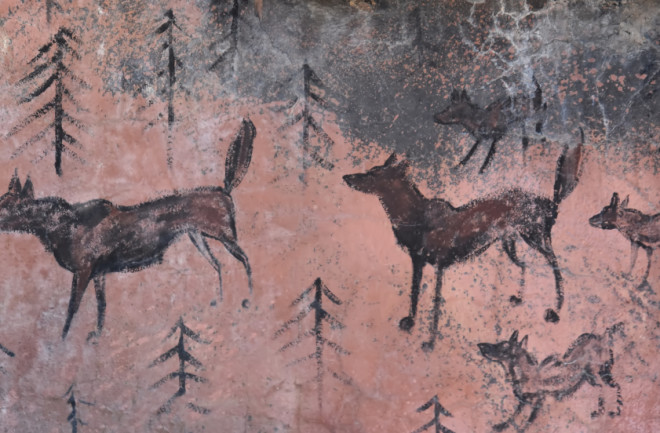 Dogs weren’t always our best friends. Humans domesticated them from gray wolves over 15,000 years ago. However, it’s still not clear where this happened.

The team sequenced genomes from 72 ancient canine fossils from Europe, Siberia and North America that spanned the last 100,000 years. By tracing genetic changes across 30,000 generations, the researchers reconstructed the timeline of the species’ evolution.

The unprecedented timescale of the genomic analysis helps researchers see “evolution play out in real time rather than trying to reconstruct it from DNA today,” says Pontus Skoglund, senior author and group leader at the Francis Crick Institute in a press release.

The team discovered that ancient wolves were genetically connected across continents during the ice age. This means any adaptations that arose in one area could quickly spread through the entire species, even across continents.

For example, a gene that controls jaw shape went from nearly zero percent to 100 percent of the species over the course of 10,000 years. Adapting to a change in prey could have helped wolves survive the harsh conditions of the ice age.

This connection in wolves also explains some conundrums about dog domestication. Many experts assumed that the wolf population that produced the first dogs went extinct because no modern-day wolves match dog genetic ancestry. However, wolf genes are constantly blending across continents, which could mask the relationship between the two genes.

The researchers compared early dog genomes to ancient wolves to infer where the first dogs might have evolved. Early and modern dogs most closely resembled ancient wolves from East Asia. However, none of the wolves that the team sequenced were direct matches for the dog descent. The source population remains to be found.

Some early dogs from the Near East and Africa also shared ancestry with a second source of ancient wolves from the Middle East. These western dog genes spread across Europe as agriculture emerged, and across the world during European colonialism.

The findings get us closer to an origin story for dogs but leaves us with ambiguity. Researchers still search for the original dogs to know for sure.