Ancient Waterways Could Have Guided Early Humans Out of Africa 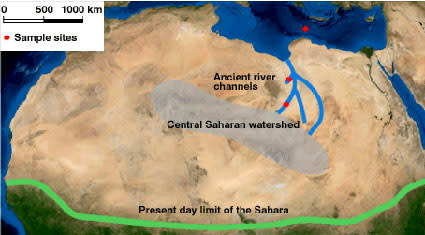 The first migration of Homo sapiens, when they left the East African landscapes where they evolved and began a long trek across the Sahara, may have followed a different route than previously believed. A new study shows that prehistoric river channels fed by monsoons once traced a path north through the desert and argues that the modern humans may have followed those channels, going from oasis to oasis until they reached the sea. The Sahara has had several periods of increased rainfall that made it a wetter and greener place, including one interlude between 130,000 to 170,000 years ago when the researchers believe these river channels flowed with water.

Now only visible with satellite radar, the channels flowed intermittently from present-day Libya and Chad to the Mediterranean Sea, says [lead researcher] Anne Osborne.... Up to five kilometres wide, the channels would have provided a lush route from East Africa – where modern humans first evolved – to the Middle East, a likely second stop on Homo sapiens' world tour [New Scientist].

But the study, published in the Proceedings of the National Academy of Sciences [subscription required], challenges this view. After discovering the remnants of the riverbeds with satellite radar, the researchers collected fossilized snail shells that were buried in the sand in Libya and showed that they were chemically identical to shells excavated from a volcano hundreds of miles away. The shells found in Libya must have been carried there by the river, researchers say. If water was that plentiful, the river channels would have offered an inviting habitat for Homo sapiens on the move, the researchers say.

Related Content: 80beats: Stone-Age Graveyard in the Sahara Recalls an Era of Lakes and Wetlands DISCOVER: Did Humans Colonize the World by Boat?Image: University of Bristol

Technology7 Ancient Indigenous Inventions That Are Part of Our Lives Today

Planet EarthWhat Did the Stone Age Sound Like?
Recommendations From Our Store