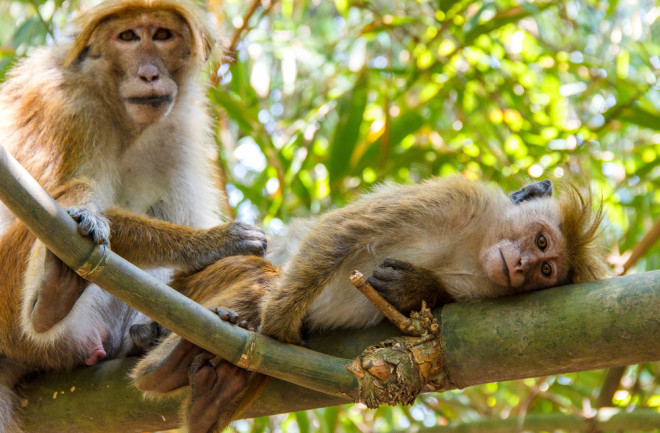 Toque macaque monkeys grooming at the Royal Botanical Gardens, Peradeniya, Sri Lanka. (Credit: Viacheslav Misiurin/Shutterstock) Some 45,000 years ago, the tropical rainforests of Sri Lanka teemed with dangerous plants and lacked big game, yet people made a life there. Our key to success in that seemingly inhospitable region? It was monkeys and squirrels, researchers say — or rather, our ability to catch them. “These animals are difficult to catch and suggest a certain level of sophistication in terms of hunting strategies,” said Patrick Roberts, an archaeologist at the Max Planck Institute for the Science of Human History in Jena, Germany, who led the new research. The discovery suggests humans had the capacity to quickly adapt to unfamiliar environments. This knack for adaptation may be what enabled people to expand across the planet, the researchers say.

Some researchers argue that as humans dispersed out of Africa, our ancestors tended to stick to savannas and grasslands where medium- to large-sized game was available to hunt. Otherwise, early humans followed coastal routes where food resources were predictable. But settling down in the heat and humidity of tropical rainforests where food is relatively scarce seemed an unlikely choice. Yet, in the last 20 years, archaeologists have uncovered evidence that humans were present in the tropical rainforests of Sri Lanka, Southeast Asia and Melanesia at least 45,000 years ago and relied on the rainforests’ resources year round. "What were they eating? And how did they obtain this food?” Roberts wondered.

Roberts and colleagues analyzed more than 14,000 animal bones and tooth fragments from Fa-Hien Lena Cave, the earliest known archaeological site with evidence for human behavior in Sri Lanka. The researchers looked for cut marks on the bones that would have suggested the animals were butchered and inspected the bones for evidence of burning. They also examined small stone and bone tools to get an idea of how early humans might have used them to hunt. Monkeys and tree squirrels accounted for more than 70 percent of the animal remains, the researchers report today in the journal Nature Communications. When the scientists examined monkey tooth fragments, they found early human hunters were targeting adult monkeys in their prime. Previous research suggested early humans used traps to hunt small game, but that strategy would have ensnared animals of all ages. “This was the first time we had clear evidence for focused [hunting],” Roberts said. It also appears that the ancient Sri Lankans were able to devise sustainable hunting strategies, based on evidence that the ancient hunters coexisted with their prey for tens of thousands of years without driving them extinct. In an intriguing twist, Roberts and his team also discovered monkey bones became hunting weapons. “Fascinatingly, the bone tools were made from [the long bones] of the monkeys and then apparently used to hunt the same monkeys!” Roberts said. “It is clear that human populations were so successful because they gained intimate knowledge of each environment and [understood] the ecosystem dynamics of each setting,” Roberts said, a stark contrast to modern times, where “through our consumer choices, a significant portion of the world’s population impacts environments thousands of kilometers away from them.”