The pumpkin in our pies and lattes was one of the first plants cultivated by prehistoric North Americans some 10,000 years ago. 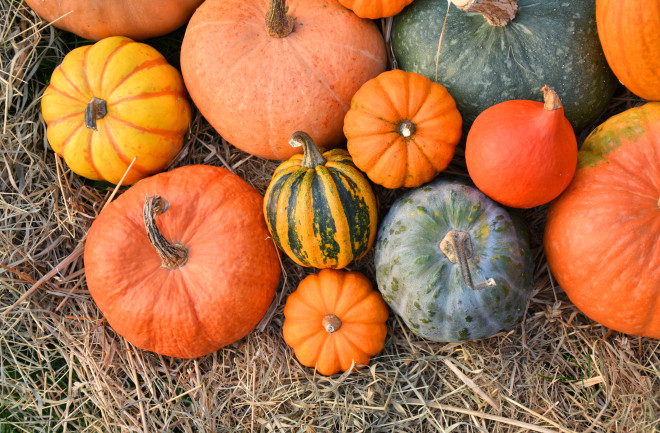 Fall is here, and many Americans are carving, eating and decorating their favorite seasonal fruit: Pumpkin. Or is it squash? Or maybe we’re actually really into gourds?

The term most Americans assign to the beloved orange orbs actually applies to a range of crops. These similar-looking plants all fall under the same scientific genus of Cucurbita, but what we consider a “pumpkin” is generally whatever Cucurbita variety is most popular in our area, says Heather Rose Kates, a population geneticist at the Florida Museum of Natural History. Other nations might deploy a range of terms to distinguish specific versions of other Cucurbita, but in the U.S., our limited terminology is as awkward as the fruits themselves. “The common names are all over the place,” Kates says. “I call them all pumpkins.”

The confusion stems from the fact that all Cucurbita varieties available today descend from five or six closely-related wild species. Each was domesticated at a different time — the first nearly 10,000 years ago in Mexico — and transformed into the colorful, bumpy and (most importantly) edible crops.

Seeing History In the Wild

There are a few ways researchers can look back on the evolutionary history of pumpkins. They can assess archaeological sites and, thanks to newer technologies, scrounge for DNA fragments in ancient rinds and seeds. But botanists can also inspect wild relatives still growing today to see what these early varieties looked like. After all, Kates points out, 10,000 years isn’t much time for plant evolution.

Cucurbita are native to North and Central America, with heavy representation throughout Mexico. The differences between those growing in the wild and those grown on farms are quite clear. Unlike our sometimes-massive, warty and colorful farmed pumpkins, says Kates, the wild versions are about the size of a baseball, light yellow and smooth. They’re also inedible. Wild Cucurbita hold high levels of a shockingly-bitter chemical that wards off pests and make the flesh not just unpalatable, but potentially nausea-inducing.

Even though the earliest consumers had to avoid these toxic innards, there are other reasons that people found themselves plucking pumpkins. The seeds in wild versions are edible and highly nutritious, and the rind held value, too. Archaeologists theorize that ancient peoples might have used bits of the rind to keep fishing nets afloat, for example.

It’s also possible ancient North and Central American peoples domesticated the plant because they were, well, there. Wild varieties are almost like weeds, Kates says. The seeds grow easily in soil that’s been dug up and mixed around, and they can tolerate drought. Scattered remains of one pumpkin can easily sprout into more gourds. “Whatever people’s intention was, the wild cucurbits didn’t leave you alone once you interacted with them,” Kates says. Harvest a few from the wild, throw the remains in a garbage heap, and not long after, new vines would crop up. A convenient local pumpkin source might encourage people to pluck their favorite ones over and over again — building preferred genetic profiles of the plants.

Over time, the crops we know today started to take shape. The vines also lost their tendency to wind up trees or other structures. Now, they snake across the land. And the bitter chemical that prevented people from eating pumpkin in the past migrated to the leaves. Stems became easier to pick as spiky protrusions started fading away, a disappearing act today’s breeders would like to complete.

Fleshing Out the Family Tree

Beyond making pumpkins easier and more comfortable to pick, most scientific investigations into the plant tend to look backward, not forward, Kates says. The traits most farmed pumpkins have today are hard won after decades of breeding. Accordingly, more and more researchers are on the hunt for four of the six earliest ancestors to today’s pumpkins.

Botanists, and those who study plant domestication, are curious to figure out exactly how human intervention morphs wild species into crops we rely on. Since many of today's foods stem from different plants domesticated in different regions, and at different times, it's hard to attribute any patterns in domestication processes to human intervention and not other factors. “When you’re comparing apples to oranges — whether literally or not — you can’t be sure,” Kates says. By contrast, pumpkins are one of the few crops that developed from several closely-related species. The parallel domestication pathways make pumpkins a perfect natural experiment, Kates says. Plus, identifying more members of the pumpkin family tree can help researchers see how different human habits and locations can shape a crop.

For now, researchers are still hoping to find new species of wild pumpkins they had previously missed. When that happens, a clearer picture of the pumpkin family tree may blossom — and who knows, maybe Americans will develop more nuanced ways to talk about the favorite fall fruit.