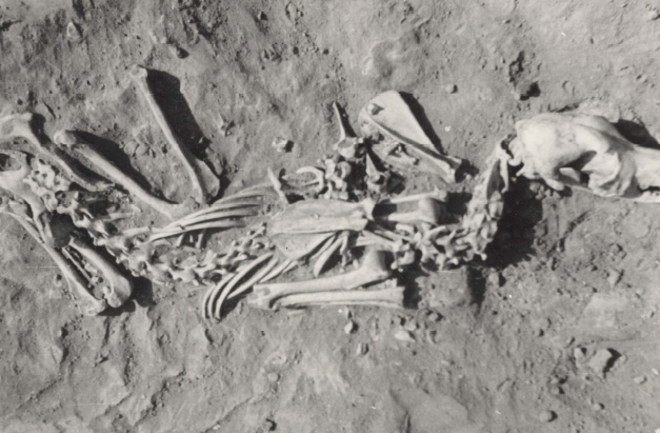 A dog buried at the site of Pad’ Kalasnikova in Siberia. This dog was buried in a crouched or sitting position. (Credit: Losey RJ, Garvie-Lok S, Leonard JA, Katzenberg MA, Germonpre´ M, et al. (2013) Burying Dogs in Ancient Cis-Baikal, Siberia: Temporal Trends and Relationships with Human Diet and Subsistence Practices. PLoS ONE 8(5): e63740. doi:10.1371/journal.pone.0063740) As a kid, when my pet turtle died we had a funeral — of course — and buried him in the backyard. When the family dog passed, his remains were cremated and placed in an urn on the mantle. In today’s society, mortuary rites for animals are so common, Yelp has reviews of pet cemeteries (5 stars for Animal Aftercare. 4.5 for Pet Haven). While online ratings are new, concern for the animal afterlife is not a modern fad. “People were doing this thousands and thousands of years ago… it’s a long, long standing practice,” says archaeologist Robert Losey. Archaeologists have unearthed ancient pet burials dating as far back as 14,000 years, from the dawn of animal domestication. Although interred animals are relatively rare (when considering the full archaeological record of all human societies), they occur in at least some cultures and time periods on every continent except Antarctica. It’s fairly easy for archaeologists to identify a burial: Filled-in pits have loose, jumbled sediment, while surrounding earth is more compact and layered. Also, complete skeletons in proper alignment indicate burials; otherwise the bones would be scattered and fragmented. The real challenge is to understand the motivations behind these burials. Ancient people may have interred animals for the same reasons we do today: because they were beloved pets, members of the family worthy of memorial. Alternatively, animals could have been sacrificed as part of a larger ritual or just buried to get rid of rotting carcasses. Here’s how archaeologists have made cases for putative pet cemeteries.

A canine burial at Todakta I Just below the dog were the cranium, mandible and lower leg bones of a calf. (Credit: Losey RJ, Garvie-Lok S, Leonard JA, Katzenberg MA, Germonpre´ M, et al.) Man’s best friend was also man’s first buried pet. During the Paleolithic, or Stone Age, hunter-gatherers domesticated wolves into dogs. Although the specific time and place (or places) this happened is disputed, by 14,000 years ago a canine, shown to be a domesticated dog by anatomical features and ancient DNA, was interred at the site of Bonn-Oberkassel, Germany. The approximately 6-month-old pup was buried with a middle aged man, twenty-something woman and grave goods including a bone hairpin, elk sculpture and the penis bone of a bear. Across the Atlantic, over 200 dog burials more than 3,000 years old have been discovered in North America. The oldest are three dogs found in shallow pits at the Koster family farm in Illinois, dating to 8,500 years ago. Deliberate burial of special dogs was particularly common between 7,000-8,000 years ago around Lake Baikal in eastern Russia. During this period forager people began burying their dead in cemeteries, and gave the same treatment to some canines. “It’s my hypothesis that people really saw those particular dogs as being spiritually the same as themselves. That they were an animal with a soul, an animal with an afterlife,” says Losey, a professor at the University of Alberta, Canada who researches ancient human-dog relationships. The evidence to support his claim: First, dogs were buried amongst humans in designated areas that seem to have been cemeteries. According to Losey, people would have had to “travel with the dog’s body and take it to those locations. It’s not just putting it in a hole right next to where you’re living.” In some cases earlier human burials were disturbed to make way for more recently deceased canines. Next, the dogs likely died of natural causes. Some are old, and they don't exhibit cut marks or other indicators of sacrifice. Finally, these animals were laid to rest with the same items buried with people, such as a spoon and a deer tooth necklace. “We see people wearing essentially the exact same necklace in human graves in that same area… They literally seem to be treating that dog just like a human,” Losey says.

Resting by the Red Sea

Another convincing case comes from the port town of Berenike on the shores of the Red Sea, in southern Egypt. Between 75-150 A.D. people living there buried animals in a specific area on the outskirts of town, which, according to a 2016 study, was a cemetery of house pets.

A selection of cat burials from a cemetery at Berenike in Egypt. (Credit: M. Osypinska) In ancient Egypt, animals were commonly sacrificed and mummified to accompany people to the grave. But the Berenike animals were treated differently. They were not mummified or placed in human tombs. Rather, they were buried in a cemetery, which has yielded nearly 100 complete animals including 86 domestic cats, 9 dogs and 4 monkeys. A few wore iron collars and two graves were double burials, containing both a cat and kitten. The largest pet cemetery or not a pet cemetery The jury’s out on the largest concentration of ancient animals: The site of Ashkelon on Israel’s Mediterranean coast contains somewhere between 500 to 1500 dogs buried over the course of a century, beginning about 2,500 years ago. The exact count is unclear because many skeletons were jumbled and incomplete, and others may have been eroded into the sea. But even the lower estimates indicate “an extraordinary number of burials,” says Paula Wapnish-Hesse, an archaeologist who studied the remains. When Persian and early Greek cultures inhabited the city, dead canines of all ages were buried in shallow pits under streets and living quarters. Aside from being lain on their sides with tails tucked between their legs, the dogs showed no signs of funerary treatment. “There were never any grave goods, never any markers, never anything to indicate to us these burials were special outside of the burials themselves,” Wapnish-Hesse says. The dogs were mostly puppies and old individuals — what you would expect from death by natural causes. There’s no evidence they were intentionally killed, at least by methods that leave marks on bones. Based on the shape and size of the skeletons, Wapnish-Hesse believes they were free roaming street mutts, rather than kept pets. And she does not consider the burials a cemetery per se, because they are found throughout a neighborhood, rather than in a separate area. So perhaps the dogs were not pets, and graves did not constitute a cemetery. The question, though, remains, why were they buried in such abundance? Other researchers have suggested the dogs were interred as part of a religious cult or after a catastrophe, like an epidemic, but Wapnish-Hesse does not find these explanations convincing. After more than three decades researching these dogs, she says, “We’ve never answered the question of why they were burying them.” Some cases remain a mystery.