Ancient flower lives only on two Spanish cliffs, and uses ants to survive 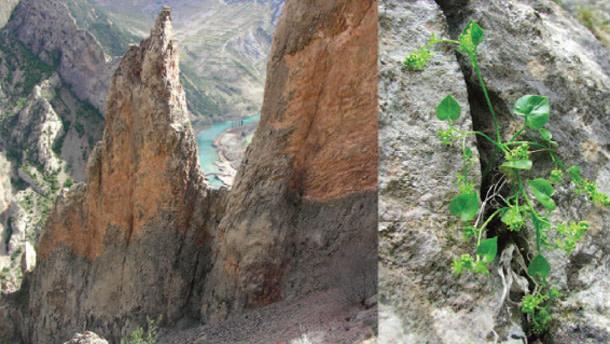 This story begins with a cliff-hanger. On the Spanish side of the Pyrenees mountains, around 850 metres above sea level, two adjacent cliff faces hold the entire population of Borderea chouardii – one of the world’s rarest plants. It’s a small herb that grows into crevices in the rock. Its leaves are heart-shaped and its flowers green and unassuming. There are around 10,000 individuals here, all growing on a square kilometre of vertical rock. Now, Maria Garcia form the Spanish National Research Council has discovered the plant’s survival strategy, which involves three different species of ants. Through these multiple partnerships, B.chouardii quite literally clings to existence. The plant is a relict, an ancient hanger-on from a time just after the death of the dinosaurs, when the Pyrenees enjoyed a tropical climate. It was discovered in 1952, and Garcia started studying it in 1993 by request of the Regional Government of Aragon, which is responsible for its management. Since then, she has regularly returned to the site by herself, and monitored all the accessible plants. “It’s not easy fieldwork, I can tell you, but exciting and fun,” she says. Borderea plants are either male or female and not both. They need some way of carrying pollen from male flowers to females. They live high in the mountains, so wind seems like an obvious candidate. But when Garcia placed several sticky microscope slides next to a male flower, none of them picked up any pollen at all. So, not wind. What about insects? Between 2008 and 2009, Garcia spent 76 hours just watching B.chouardii to see which insects visited its flowers. The majority were ants: Lasius grandis and Lasius cinereus in particular. That seems to fit, for B.chouardii has many of the traits you’d expect of an ant-pollinated flower. Low-growing, nectar-filled flowers that can be reached by a non-flying insect? Check. Small flowers that aren’t attractive to bigger insects? Check. The ants are rare visitors but effective pollinators. Across 17 years of observations, Garcia has found that around 83 percent of the female flowers eventually bear fruit. But the plant then has another problem: How does it disperse its small, yellow seeds? It can sow itself: Borderea grows away from light, and some of the fruits end up headfirst in new crevices. Two-thirds of the seedlings germinate in this way. The two ants that pollinate B.chouardii might also contribute, since the planthas been found growing from their nests. But the main seed disperser is another species of ant entirely – Pheidole pallidula. Garcia demonstrated this by setting up seed “cafes” – plastic seed-filled vials that were glued to the cliff. Only P.pallidula visited the vials, and dragged the seeds off to nearby crevices. It prefers the seeds of B.chouardii to those of related species, and it eats two thirds of the seeds it collects. The rest are left to germinate. Garcia’s careful observations suggest that Borderea takes part in a “double mutualism” – partnering up with some ants to both pollinate its flowers and another to disperse its seeds. It’s a risky strategy. Even though three species of ants are involved, Garcia says that the plant is “putting all its stakes on just one kind of mutualist.” If ants disappear, perhaps if the surrounding cliff-sides become unsuitable for them, then B.chouardii would go extinct. “It is difficult to imagine other animals playing the ants’ role,” says Garcia. But Borderea has another trick to mitigate its risk of extinction: an extraordinary lifespan of up to 300 years! In 17 years of monitoring, Garcia and other scientists have only counted 139 seedlings – just 8 per year. This is a plant that lives life in the slow lane. Its population is small and grows at an infinitesimal rate, but it’s in no rush. The cliffs it hangs from are inaccessible to grazing animals, sheltered from the excesses of the elements, and constant in their climate. Few new individuals are born each year, but few survivors die. Several were lost to public works before Garcia came on the scene, but she soon set up a management plan that prevented further losses. One of her colleagues has also started a programme to grow them in 2 new sites. Will she succeed? We cannot say. This story ends with a cliff-hanger. Reference: Garcia, Espadaler & Olesen. 2012. Extreme Reproduction and Survival of a True Cliffhanger: The Endangered Plant Borderea chouardii (Dioscoreaceae). PLOS ONE http://dx.doi.org/10.1371/journal.pone.0044657