On an isolated rock plateau in southern Israel, surrounded by steep cliff-faces, stands the imposing fortress of Masada. The site was built by King Herod as a pleasure palace and became famous for the alleged mass suicide of its Jewish inhabitants, who chose death over capture by Roman invaders. 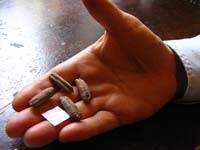 But while the fortress's occupants have long died, one former resident is still around - an ancient seed that survived beneath the rubble for 2,000 years and has today germinated into a tree. The seed comes from a date palm and appropriately enough, its carries the genus name of Phoenix and the nickname of "Methuselah".

The seed was one of three that were excavated from Masada in the 1960s. It was stored at room temperature for four decades before being finally planted in 2005 by a team led by Sarah Sallon at the Hadassah Medical Organisation in Jerusalem. 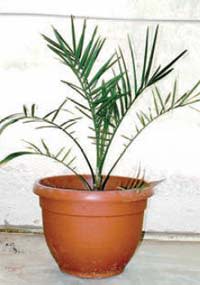 The planting took place on January 19, the date of the Jewish New Year of Trees, when new trees are traditionally planted. Eight weeks later, it has started to sprout. Under the careful attention from plant specialist Elaine Solowey, the tree developed in a normal way. At first, its early leaves developed white patches where they lacked chlorophyll, probably because of a nutrient deficiency. But Methuselah managed to shrug off these early problems, and by early 2007, it was a four feet tall.

Sallon confirmed the seed's extreme age by carbon-dating small fragments of its original shell that were still clinging to its roots. The technique assesses the levels of a radioactive form of carbon that accumulates in living tissues but starts to fall in a predictable way once an organism dies. Based on these measurements, Sallon found that the seed was two millennia old, give or take about 50 years.

The resurrected date palm smashes the previous record for oldest seed ever germinated, held by a 1,300-year-old lotus seed. Sallon thinks that its longevity is the result of the high summer temperatures and low levels of rainfall at Masada. These harsh conditions dried the seed and curtailed the production of the free radicals, molecules that are a major force in seed ageing. 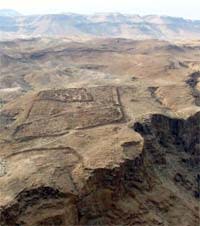 The date palm (Phoenix dactylifera) was first domesticated about 5,000 years ago and at the time that the Methuselah seed was born, the Judean Dead Sea region was famous for its extensive trade in dates. Since then, the historic date populations have been lost and today, only a few, low-quality palms are propagated from local seeds. Israel imports most of its date palms.

Methuselah, however, represents a second coming for this extinct population. It shares about half of its genetic material with modern dates from Morocco, Egypt and Iraq, and the remainder could allow geneticists to peer back in time at their genes. If Methuselah turns out to be female (and Sallon will only know that for certain in about two years), it may even help to restore the date palms of old.