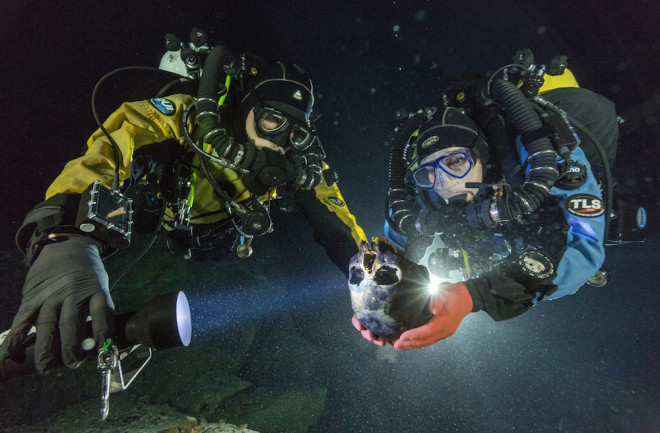 Divers transport the Hoyo Negro skull to an underwater turntable so that it can be photographed in order to create a 3-D model. The project was supported by the National Geographic Society. Photo Credit: Paul Nicklen/National Geographic. An ancient human skeleton discovered in an underwater Mexican cave has answered a crucial question about early Americans: How they came to look so different from their Siberian ancestors. Genetic studies have pointed to a Siberian ancestry for modern Native Americans. Most researchers believe the first Americans (Paleoamericans) migrated from northeast Asia via Beringia, the now-submerged land bridge between present-day Siberia and Alaska, some 18,000-26,000 years ago. But the facial features of the oldest American skeletons don’t look much like those of modern Native Americans. This has inspired a number of controversial counter-theories claiming the Americas were first settled by people from elsewhere in Eurasia. Now, the near-complete skeleton of a teenaged girl, believed to be 12,000-13,000 years old, is helping settle the debate. Her skull, with its narrow face, prominent forehead and wide-set eyes, is similar to that of other skulls considered to be Paleoamerican — but she shares a genetic signature with modern Native Americans.

The skeleton was found in the Hoyo Negro ("Black Hole") cavern beneath Mexico's Yucatan Peninsula. Called "Naia," after the Greek word for "water nymph," she is the first specimen with Paleoamerican craniofacial features to have its DNA successfully sequenced. Researchers announced today that Naia's mitochondrial DNA (mtDNA) shares a genetic lineage with Native Americans. The lineage, known as haplogroup D1, derived from the northwest Asian haplogroup D and is unique to the Americas. Just as importantly, researchers found no genetic evidence suggesting Naia had ancestors from elsewhere. The Hoyo Negro find proves at least some ancestors of modern Native Americans had Paleoamerican features, effectively shutting down the theories that contended it was not possible. Speaking to reporters about the Hoyo Negro results on Wednesday, researchers involved with the study suggested that the craniofacial features specific to modern Native Americans could easily have evolved in a few thousand years, well after the first Americans were established here, and pointed to numerous known examples of similarly fast adaptations in humans to environmental factors such as cold or altitude.

The Hoyo Negro skeleton, the most complete Paleoamerican remains known, was found by three divers exploring the cave in 2007. The divers also found the remains of at least 26 animals, including sabertooth cats (Smilodon fatalis) and the elephant-like gomphothere (Cuvieronius cf. tropicus), both now extinct. At the time Naia lived, the enormous cavern — about 170 feet deep and 200 feet in diameter — was about five miles inland from the Caribbean and not submerged, though small amounts of water occasionally collected on its floor. Beginning about 10,000 years ago, at the end of the last Ice Age, as glaciers melted and the sea levels rose, Hoyo Negro was gradually inundated. By 8,000 years ago, the cave and its access tunnel were completely underwater. Hoyo Negro currently can only be reached by highly skilled divers via a 3,000-foot-long tunnel full of hazards. For this reason, and because researchers were committed to preserving the cave's scientific integrity, progress on analyzing the remains has been painstakingly slow. Even confidently dating the skeleton was challenging.

Because the underwater environment was poor for preserving bone collagen, researchers were unsuccessful in their attempts to date the bones of both human and animal remains using radiocarbon dating. Instead, the team relied on three separate methods. First, they aggregated data about sea levels in the area over the past several thousand years and determined when Hoyo Negro filled with water, concluding that the bones found there must have been deposited before then. The team also took note of the approximate extinction dates of the animal species found in the same area as Naia. Finally, researchers conducted isotopic analysis of crystals growing on both human and animal bones found in the caves. They were able to determine when the crystals began growing and whether they were exposed to air or were underwater, allowing them to narrow down the age of the skeleton from 12,000-13,000 years old. Other researchers on the international team sequenced the mtDNA extracted from one of the skeleton's teeth; two additional labs independently performed the same sequencing to verify the results. Researchers provided a video about the finds at Hoyo Negro and their significance. The findings complement the recent whole-genome sequencing of an early American, the infant boy Anzick-1, who lived about 12,600 years ago in what is now Montana. Because Anzick-1's remains did not include his skull and jaw, however, researchers had been unable to determine whether his craniofacial features were typically Paleoamerican or more similar to that of modern Native Americans. Researchers who worked on the Hoyo Negro study, published today in Science, said that a facial reconstruction of Naia would be released in June and that an attempt to extract and sequence nuclear DNA from the remains — which would provide additional details about her ancestry and relation to modern Native Americans — is already underway.