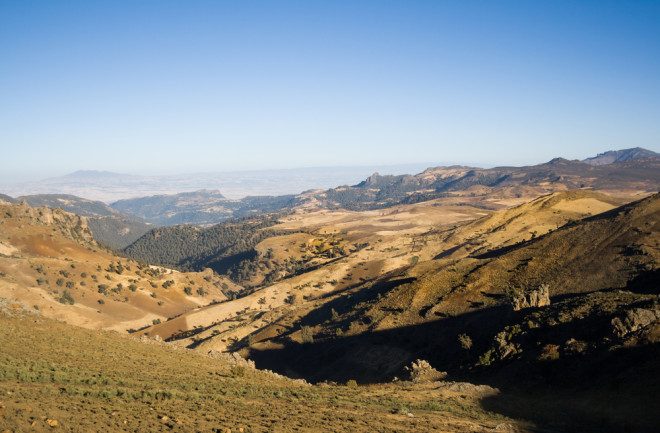 High-altitude environments are not exactly welcoming places to call home. It’s hard to breathe, there’s little shelter and being that much closer to the sun means more exposure to UV radiation. The inhospitable conditions are why high mountains and plateaus were some of the last places on Earth humans occupied.

Now researchers find prehistoric humans lived in a high-altitude rocky outcrop in Ethiopia’s Bale Mountains 31,000 to 47,000 years ago. They say the discovery is the earliest evidence for humans taking up residence at high altitude.

Ancient humans inhabited the Tibetan Plateau 30,000 to 40,000 years ago, and our cousins, the Denisovans, were there as long as 160,000 years ago. But this is the first time ancient humans have been found living at high altitude in Africa.

The researchers suspected the humid African mountains were a refuge from the dry lowlands for early humans. To find out, the team undertook a systematic survey of rock outcrops of the Sanetti Plateau in Bale Mountain National Park. They traveled by foot and horseback to inspect hundreds of rock shelters. At a site called Fincha Habera, a rocky shelf located high above the plains, they found what they were looking for — actually, much more than they were looking for.

“We definitely did not expect the multitude of archeological materials at the site,” University of Cologne archaeologist Götz Ossendorf, lead author of the study, said in an email.

The team uncovered ancient charcoal from hearths and charred animal bones. Nearly all of the animal bones belonged to giant mole rats. The native rodents were abundant and made for easy picking. Burn marks near the ends of the bones indicated early humans roasted the animals to eat them, the researchers report Thursday in the journal Science.

“This was a very clever choice as in these high altitudes the body needs a higher caloric intake,” Ossendorf said. “At the same time, it is very strenuous to hunt in these altitudes, but hunting of these animals is comparably easy.”

When the researchers dated the remains using charcoal from the hearths, they were surprised to find people had lived at such high altitudes possible more than 40,000 years ago. At that time, the region was very cold and the plateau was covered in ice.

“We did not expect sites which were inhabited during an ice age,” said Martin Luther University soil scientist Bruno Glaser, the study’s co-author, told Discover via email. But he adds, the site provided the basics: shelter, food and drinking water from glaciers that melted during the day. There were even luxuries, like an obsidian quarry.

“Maybe the reason for inhabiting this rather inhospitable site was a huge obsidian outcrop,” Glaser said. He and his colleagues suspect early humans fashioned tools from the stone, which they traced to a site nearby.

The abundance of relics the team found in combination with the hearth remains, massive quantities of human feces and clear evidence of food consumption all indicate humans repeatedly returned to the site many times over thousands of years, the researchers report.

In essence, “they used the site as a kind of base camp,” Ossendorf said.