An Archeologist's Tale of Finding a Barrow

Even with the latest tech, luck plays a role in archaeological discovery. 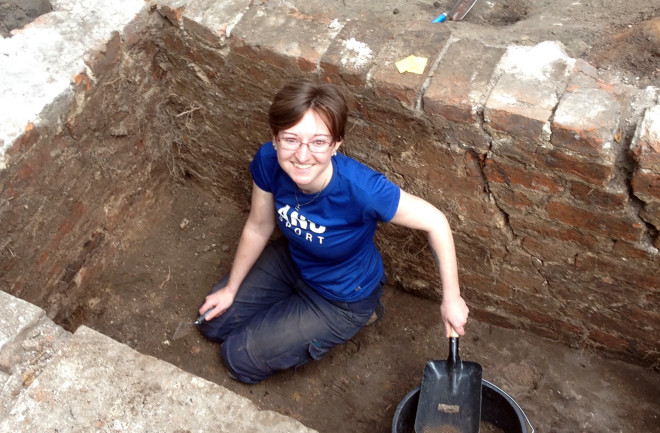 Determining where to dig is the first step for archaeologists. To find promising sites, today’s researchers use advanced technology, including satellite imaging and ground-penetrating radar, in addition to the traditional method: walking across a landscape looking for any sign of artifacts.

But identifying the right spot also takes a good bit of luck. Just ask archaeologist Catherine Frieman of the Australian National University. For the past six years, she has led a project searching for prehistoric sites between 1,500 and 4,500 years old in Cornwall County in southwest England. After analyzing farmlands overlooking the English Channel, her team produced subterranean maps based on subtle differences in electromagnetism between soils and any archaeological remnants. They also reviewed aerial photos for surface features that suggest buried mounds and ridges, which may be barrows — ancient monuments sometimes containing burials.

Despite their systematic efforts, Frieman and her team nearly missed their best discovery, a 4,000-year-old Bronze Age barrow. They almost skipped over the trove not once, but twice during surveys in summer 2017 and the following April. Their success was thanks to good fortune and a tip from a local farmer, who had been working the land for years.

We were working and talking with the farmer, who’s a real friend to the project. He said, “While you’re out here, if you have some time, I’ve got a barrow in another field.”

We went with the geophysics team and figured it couldn’t hurt to look. We put the results through the software and, bing, it popped up. The geophysics image showed a very dark circular ditch about 16 meters across with a bunch of dark splotches in the middle. It was a Bronze Age barrow. It was pretty obvious that’s what it was.

Nine months later, we went back and opened up a big trench. We did our best to position it, but because we were dealing with some pretty awful weather, the GPS was accurate only to about 60 centimeters.

At one edge of the trench, we found a bit of dark soil, which usually means you’re onto an archaeological feature. We said, “What’s going on here? Maybe we should widen this out.” There were about four of us having this conversation in the rain.

We ended up extending the trench about a meter north and 80 centimeters east, and — crack! — we suddenly hit a little bit of pottery. It was the central feature of the barrow: this beautiful collared urn pot about half full with cremated human remains.

It’s really exciting when you find a barrow with an intact central burial. That’s not all that common in Cornwall. Only between 40 and 50 percent have human remains.

I can’t help but think: Wouldn’t that have been frustrating if we’d just cleared off, if we hadn’t widened the trench a little bit farther and found the Bronze Age feature?

We’re going back next year to excavate the settlement site nearby. We have a lot of community support, which we really appreciate.

This story originally appeared in print as "Finding a Barrow, Barely."