America's Pomegranates Are a Bore. One Researcher is Using His Grandfather's Fruit to Change That

John Chater's on a quest for a better American pomegranate. 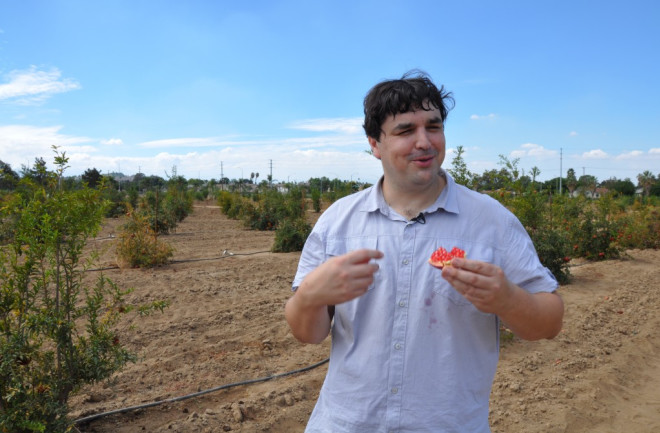 There’s a lot more to pomegranates than their reputation in the U.S. would suggest. The fruits are known for their bittersweet juice, hard seeds, and their exploding-puzzle-box configuration that can leave kitchens looking like crime scenes.

Around the world, pomegranates take on many different forms. They can be sweeter, softer, or come in different flavors and colors: pink, yellow, or even white, instead of the U.S.-standard red. Ask someone from Iran, India, Turkmenistan or Spain who grows the best pomegranates, and they’d likely say Iran, India, Turkmenistan or Spain, respectively. But none of these foreigners would think too highly of a U.S. pomegranate, according to John Chater, a geneticist at the University of California, Riverside, and major pomegranate aficionado.

This sounds like a harsh take on what many Americans would consider a delicious fruit – but do we even know what we’re missing?

Chater inherited his interest in pomegranates from his grandfather, a Lebanese immigrant, who was a pomegranate breeder.

Growing up in California, Chater was exposed to a diversity of pomegranates, including cultivars his grandfather brought over from the Middle East and new varieties that he bred himself.

“When I’d visit him… he had a really nice garden and a little (pomegranate) operation going on there,” says Chater. “He showed me a closer look of what was going on and what he was doing, and that really turned me on to it.”

Chater began working on pomegranates himself as a graduate student, where his research advisors let him choose his own projects, study crops and even specific cultivars – including his grandfather’s best, Eversweet.

Chater is now studying pomegranates from around the world, in hopes of bringing some of their best qualities to the crops grown and sold in the U.S. The vast majority of pomegranates on the U.S. market today are grown in California and are a single variety: Wonderful.

But Wonderful wasn’t carefully selected for American consumers or American growers, says Chater. Instead, this pomegranate was in the right place at the right time, and serendipitously came to dominate the market.

As the story goes, the company we now know as The Wonderful Company acquired some farmland in California’s central valley that happened to have some pomegranates planted on it.

Co-owners Stewart and Lynda Resnick originally planned to remove the trees and plant citrus. But after a little digging, the Resnicks learned that some medical professionals were suggesting the fruit had beneficial properties, and that other cultures revered the pomegranate for its medicinal qualities. They decided to keep the trees.

These pomegranates happened to be Wonderful. Thanks to their commercial success, Wonderful became the industry standard.

“You know, in my opinion it’s not probably the best way to choose an industry standard – just because it’s sitting there,” says Chater.

Meanwhile, the rest of the world continues to enjoy a wide range of delicious pomegranate diversity. That’s why Chater thinks we can do better than Wonderful.

Some pomegranate breeding research is as simple as tasting different varieties to see which are best. Researchers conduct taste trials called sensory panels where participants rate parameters like the sweetness or bitterness of different fruits.

Chater’s team was recently awarded a grant from the California Department of Food and Agriculture to find out how receptive school children would be to pomegranates in their lunches. Are they more likely to eat pomegranates over apples or oranges? Are they more receptive to some pomegranate varieties over others?

Thanks to modern biotechnology, plant breeders like Chater can now analyze the chemical profiles of different varieties which allows them to study why different varieties have such different tastes. And, with increasing frequency, they can trace different chemical compounds back to specific genes, which can greatly accelerate the breeding process.

But even the most delicious pomegranate won’t be able to infiltrate the U.S. market unless the crop itself can keep up with Wonderful.

Wonderful has high yields and, in Chater’s words, “really nice” pest and disease resistance. Any new varieties would need to have these traits, too, else it would pose too great of a risk for growers to make the switch from Wonderful.

The Future of Pomegranates

Chater has big ambitions for pomegranates. Besides better taste and more varieties, he’s interested in testing the staining properties of the different juices and working on easier-to-open varieties.

“One day we will get a pomegranate with a zipper peel or an easier way to open it up. But right now, that’s a major problem – most people on average eat less than one pomegranate per year,” says Chater. “How many know how to open one up without causing a major mess?”

He’s got a lot of work ahead of him, but he hopes he’ll have help in the future.

“I have a new son just 6 months old, maybe he’ll like pomegranates,” says Chater. “It seems to skip a generation.”

He adds: “Hopefully down the line somebody likes pomegranates as much as I do and will continue to support crop improvement.”