Step aside Roanoke, Jamestown and Plymouth — St. Augustine is technically the oldest permanent European settlement in the continental United States. Here's the history of this place. 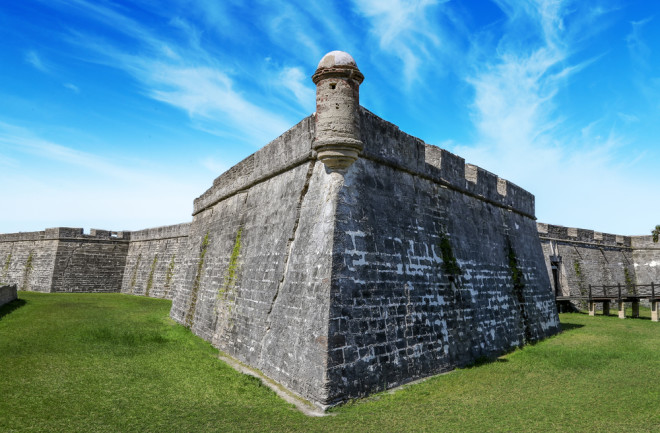 Ten weeks after setting sail from Spain, on the feast day of St. Augustine in 1565, Pedro Menendez de Aviles saw land. When the admiral came ashore two weeks later on Sept. 8, he claimed the site for his country and named it for the towering Catholic theologian on whose day it appeared across the water.

Thus begins the story of the northeast Florida settlement that outlasted the rest to become the oldest continuously inhabited city in the continental U.S. Before the British — and later the independent states — overran their newfound landmass, the Spanish carved out a corner for themselves in a bid to guard their Caribbean interests. Historians of this abiding and stunningly diverse community lament that nowadays it’s a mere side note in the American saga.

“When you look at St. Augustine, the story changes,” says Michael Francis, of the University of South Florida, St. Petersburg. “You start to appreciate the long-term history in a way that isn’t dominated by this English narrative that is so prevalent.”

But before Menendez could cement his role in the continent’s trajectory, the conquistador and his convoy — soldiers and their families, perhaps 800 in all — had a military directive: King Phillip II sent them with orders to expel the French Huguenots, who had recently established a colony and built Fort Caroline near present-day Jacksonville, in territory belonging to the Spanish crown.

Menendez wasted no time. In an overland ambush just days after they arrived, his men marched through 40 miles of swamp and routed the fort’s defenders. Meanwhile, the French naval officer Jean Ribault had sailed south to confront the Spanish at St. Augustine, but a storm blew the fleet off course and shipwrecked them near what is now Daytona Beach.

Ribault and his troops, now on foot, trudged back toward Fort Caroline until an inlet blocked their progress. Menendez found them and, enlisting a captured Frenchman as translator, told them they had no fort to return to. Most of the French surrendered.

Though the Spanish offered to spare any Catholics, all but 10 proclaimed their Protestantism. The other 250 or so were duly executed, and to this day the inlet and its estuary bear the name Matanzas — Spanish for “massacre.”

The first Jamestownians wouldn't land ashore for another few decades, and the oldest soon-to-be Plymouth pilgrims weren’t yet 10 years old. But the textbooks are rich with their stories, not St. Augustine’s.

“It’s not seen as a core of the U.S.,” says Susan Parker, executive director of the St. Augustine Historical Society, who grew up in the area. “We’re starting as a nation to be a little more open-minded as to what our history was like and who was part of it, but that’s very slow.”

Though control of the Atlantic seaboard eventually fell to the English, for decades the most significant European settlement on the continent belonged to Spain. The location of St. Augustine was a strategic choice. From there, the Spanish could protect their treasure fleet as it sailed to and from Veracruz, Havana and other Caribbean hubs — including San Juan, Puerto Rico, which was founded in 1521, making it the oldest European settlement in the United States including territories. They also explored inland, searching for river passages to the Gulf of Mexico and the Pacific.

It was also the site of the continent’s first documented Christian marriage: the interracial union of Luisa de Abrego, a free black woman, and Miguel Rodriguez, a Spanish soldier. And a century before the Underground Railroad shuttled enslaved Africans to the North, many escaped south to a tiny haven outside St. Augustine called Fort Mose, the first legally sanctioned free Black town in North America. All this, Francis notes, “in a location that in the 20th century had Jim Crow.”

The population of St. Augustine was mostly poor, subsisting on maritime foods like oysters and shellfish, plus some maize and shipments of cured meats, wine and cheese from other ports. But overall they enjoyed a comfortable existence as far as remote outposts go. After examining the city's early death records, Francis says he found no sign of widespread destitution, suggesting the governors exaggerated in their correspondence with the Spanish crown.

What truly flourished was Catholicism, as the Franciscans spread dozens of missions across Native American territory in an effort to proselytize the indigenous people. The continent’s first mission, ahead of those in California and the Southwest, stood in what is today a St. Augustine city park.

From the beginning, St. Augustine lived under the threat of British attack. In 1672 they began work on the still-standing Castillo de San Marcos, a fort made of coquina, or shellstone, a malleable material with an impressive ability to absorb cannon fire. In the next century they completed Fort Matanzas, a smaller structure, to guard the southern route to the city.

Their strongholds didn’t save them. During the Seven Years War in the 1760s the British seized Havana, forcing Spain to cede Florida for its return. The occupation was short-lived: The Spanish regained Florida at the end of the American Revolution, in the Treaty of Paris.

But over the coming decades their control weakened, and in the early 19th century the crown finally wearied of its problematic peninsula. With the Americans poised to run them out anyway, Spain handed over Florida to the U.S. in the 1819 Treaty of Adams-Onis, and the U.S. took on the $5 million debt associated with the colony. With that, the land switched hands for the last time.

Of course, long before Europeans began bickering over their squalid coastal settlements, Native American societies had risen and fallen across the continent for millennia. St. Augustine itself overlays the Timucua village of Seloy. And in a different sense the Mississippian complex of Cahokia — with its monumental earthen mounds and a population of perhaps 20,000 in the centuries preceding Columbus — deserves the distinction of America’s “oldest city.”

In the decades after its annexation, Florida emerged as the tourism hub it remains today, drawing snowbirds from the northern states. To foster that trend, the entrepreneurs of St. Augustine embellished its heritage to “entertain the visitors,” Parker says.

One such embellishment was Juan Ponce de Leon’s fabled quest for the fountain of youth, a beloved tale with little grounding in reality. The first Spaniard to set foot on La Florida (the name he gave the region), Ponce de Leon never once mentioned restorative waters when writing of his voyages. His ambitions were worldly: land, gold and prestige.

But the myth persists, and a long-standing tourist attraction in St. Augustine bears the name Fountain of Youth Archaeological Park. “It’s a town that markets itself for its history,” Parker says. “It’s an economic engine.”

For many, she added, their cultural heritage is just as personal as it is commercial. Plenty of residents stand squarely in one camp of an esoteric disagreement over Ponce de Leon’s true landing site, claiming it to be 30 degrees 8 minutes north (the latitudinal reading for their city). Based on the Spaniard’s own account, they’re correct. But in 1990 a Florida sailor, retracing the 16th century course, landed at 28 degrees north, on Melbourne Beach. To the residents of St. Augustine, such disputes matter.

Whatever the truth, “it’s a place where people feel strongly about history,” Francis says, adding that they’re still shaping that history. “It’s not a museum, it’s an organic place. It changes over time. People are part of this fabric that you see when you look at any period of St. Augustine.”