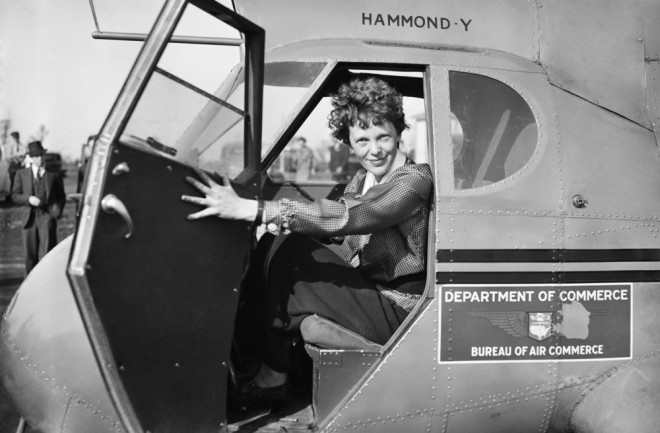 Amelia Earhart, photographed in 1936, the year before her disappearance. (Credit: Everett Historical)

Where in the world is Amelia Earhart? It’s a question that has captivated the public ever since the famed aviator went missing in 1937 over the Pacific Ocean.

Theories and conspiracies abound, but most of the detective work has focused on a collection of bones unearthed on Nikumaroro, one of a spray of remote atolls scattered like freckles in the Pacific between Hawaii and Australia.

In 1940, a skull and several other bones, bearing signs of having been nibbled by coconut crabs, were found beneath a palm tree by workers constructing a settlement, along with a sextant box, and, later, the heel of woman’s shoe and debris believed to be from an airplane.

Measurements of the bones initially indicated that they belonged to a man about 5 feet, 6 inches tall, though later work would call that data into question. Unfortunately, the bones disappeared after being sent to Fiji for analysis, and there’s no way to update the measurements with more modern techniques.

The pendulum swings back in favor of the bones being female in a study published this week in the journal Forensic Anthropology. It’s authored by Richard Jantz, a professor emeritus in the department of anthropology at the University of Tennessee-Knoxville, and he returns to the original measurements of the bones to argue that they did once belong to a woman. In the light of the circumstantial evidence, he argues that the bones being Earheart’s is the only explanation that fits.

While the initial measurements may have pegged the bones as male, Jantz argues that the forensic practices of the time weren’t sufficiently advanced to provide a definitive conclusion. In addition, the initial measurements were compared to historical figures taken when people were shorter on average than in Earhart’s time. The dimensions of the tibia, humerus and radius are consistent with a taller female, he concludes. Estimates of Earhart’s height obtained from a photo of her standing beside her airplane and measurements of her clothing align with the bones as well, he says.

There’s an accumulation of circumstantial evidence that argues in favor of the bones being Earhart’s, as well. Nikumaroro lies roughly along Earhart’s flight path, and the only other people likely to have perished there were crew members of the SS Norwich City, a freighter that ran aground on the island’s reef killing all 11 men. The bones didn’t look like those of a Pacific Islander, and were far too short to belong to Earhart’s navigator, the six-foot-tall Fred Noonan. The sextant box and shoe heel are also unlikely to have come from any of the shipwreck survivors.

Based on the available evidence, and comparing the bones’ measurements to a reference collection of other individuals, Jantz says there’s less than a one percent chance the bones don’t belong to Earhart.

“Until definitive evidence is presented that the remains are not those of Amelia Earhart, the most convincing argument is that they are hers,” he writes.