All Things Iron from the Bronze Age Had Cosmic Origins 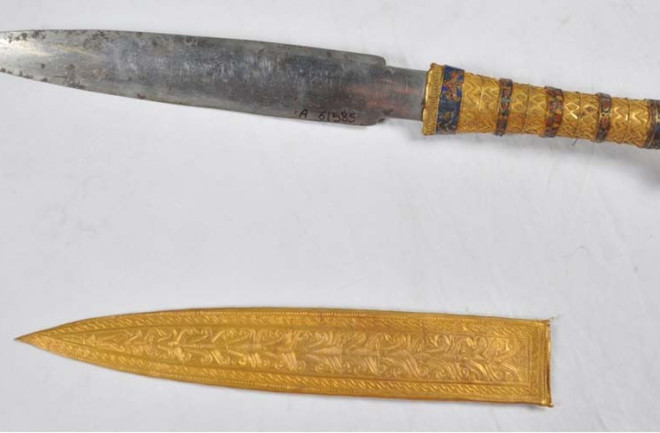 King Tut's dagger, the blade is made of meteoric iron. (Credit: Daniella Comelli) Looks like King Tut's space dagger wasn't so special after all. The legendary Egyptian pharaoh was found last year to have been buried with a dagger forged from a meteorite, a truly cosmic artifact fit for a king. Well, as it turns out, pretty much everything made of iron from that period came from fallen space rocks, taking the "wow" factor down a few notches. That's not to say that artifacts of meteoric origin are commonplace — they're not — but in the Bronze Age, if you were working with iron, it's a safe bet that it fell out of the sky.

Albert Jambon, a researcher at the University Pierre and Marie Curie in France surveyed a collection of Bronze Age iron artifacts with a portable x-ray fluorescence scanner, the same technique that let researchers determine the origin of Tut's dagger. The imaging technology allows for non-destructive scans, important for examining priceless archaeological artifacts. The scanner picks apart the composition of an object, and Jambon could then determine what kinds of elements are present. He was looking to see if the iron artifacts also contained nickel and cobalt, a strong sign that they were of extraterrestrial origin. Earthly iron contains very little nickel, but it shows up prominently in iron from meteors. Analyzing the iron-cobalt ratio provides further evidence that the iron fell from the sky. Jambon examined beads from Egypt, a dagger from Turkey, a pendant and axe from Syria and artifacts from China. Not to be left out, he also included Tut's dagger, in addition to other iron objects from the pharaoh's tomb. He then compared them to iron that we know came from meteors and iron from Earth. The artifacts were all from between 1300 and 3200 B.C., a date range that lines up with the generally accepted boundaries of the Bronze Age. Though they all came from different places, the levels of nickel and the ratio of iron to cobalt indicated that the metal for each and every one came from space.

From Stone to Iron

The find, published Monday in the Journal of Archaeological Science, adds weight to theories about the general progression of technological development that occurred in ancient societies. There's a rough three-part breakdown of historic eras: the Stone Age, the Bronze Age and the Iron Age. The nomenclature is quite literal—each age was defined by the kinds of materials societies used to make tools and artwork. The transition from stone to bronze and then to iron has come to represent, however imperfectly, man's increased technological capabilities and gradual march toward the present day. All of this is to say that in the Bronze Age, when all of these artifacts were made, they shouldn't have been working iron. Though some theories hold that the boundary between bronze and iron wasn't so neat, Jambon's work casts some doubt on that. Mining and smelting terrestrial iron was more difficult than creating bronze from copper and tin, and involved a reduction process that drew pure metal from unusable iron ore. The technology to do so didn't appear until later, Jambon's work suggests, and there weren't any isolated incidents of iron smithing to muddy the waters. When ancient peoples stumbled across metallic meteorites, however, the iron was already in its metallic form and could be worked with existing technology. Meteoric iron was their mithril, their adamantium, their Valyrian steel — rare and possessed of qualities no human could recreate. Until the Iron Age, obviously.