After 9 Years Retirement, Lab Chimps May Return to Medical Testing 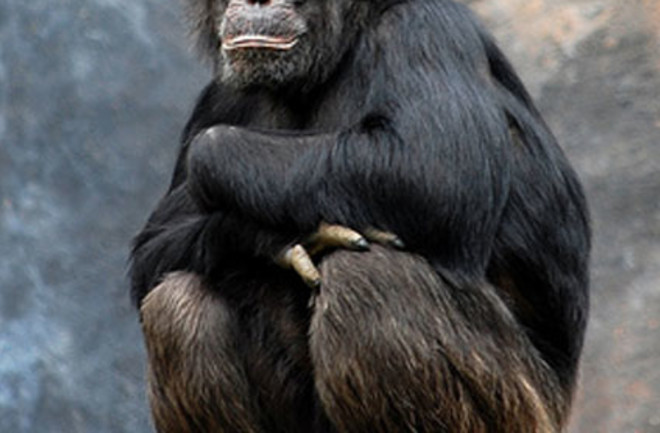 The governor of New Mexico wants a say in the future of 168 chimpanzees, and has pulled scientists, government officials, and even Jane Goodall into the debate. The chimps in question are currently living (and have been for the last ten years) in a research reserve in the town of Alamogordo in New Mexico. They were all previously used as lab animals, where they are used to test and study HIV and Hepatitis C, life-threatening human diseases which don't grow in any other animals. The chimps were removed from laboratory testing after being taken from the Coulston Foundation, a research facility that was found to be abusing and neglecting its primate residents. The Alamogordo reserve was given the ten-year contract to house and care for the animals in 2001.

Harold Watson, who heads the chimpanzee research program for the National Center for Research Resources, said that with the end of the contract, it only makes sense to use the chimps for their original purpose. [The New York Times]

To cut costs (the contract paid out to the tune of about $2 million per year), the NIH is planning to move the chimps to a facility in San Antonio

that already houses 172 chimps. There, they might be used once again for medical testing. The director of the Texas facility explains that any procedures on the chimps would be small, like injections or tissue samples.

"These are mostly clinical procedures that are also done with human beings," said Dr. John L. VandeBerg, director of the Southwest National Primate Research Center. "We are doing them with chimpanzees to develop drugs and vaccines that can be used in human subjects." [The Associated Press]

Enter New Mexico's governor, Bill Richardson. He wants Congress to convert the chimps' current home in Alamogordo into a sanctuary and behavioral research facility, keeping the chimps, the money, and the jobs at home. Jane Goodall has written to the NIH arguing against the move to Texas, and animal rights advocates are supporting Governor Richardson's proposal.

“These chimpanzees have given up their freedom, if not their natural environment, their bodies, their health, their children to research,” said Laura Bonar, program director for Animal Protection of New Mexico, which wants the government to turn the Alamogordo facility into a retirement sanctuary for the chimps. “And at the end of their lives, we can give them something back.” [The New York Times]

Returning these Alamogordo chimps to active medical research duty has reignited the debate over the ethics of primate experimentation. The use of great apes for medical research has recently been outlawed in Europe

, and there is currently great ape protection legislation pending on the congressional floor, but the NIH hasn't been very receptive to the suggestions made by Richardson to keep these chimps out of the lab.

NIH spokeswoman Cindy McConnell said the agency's plan "is to transport all of the Alamogordo Primate Facility chimpanzees to the Southwest National Primate Research Center by the end of 2011." [The Dallas Morning News]