As the fish's embryos enter a hibernation-like state, their DNA changes and keeps tissues from aging or deteriorating. 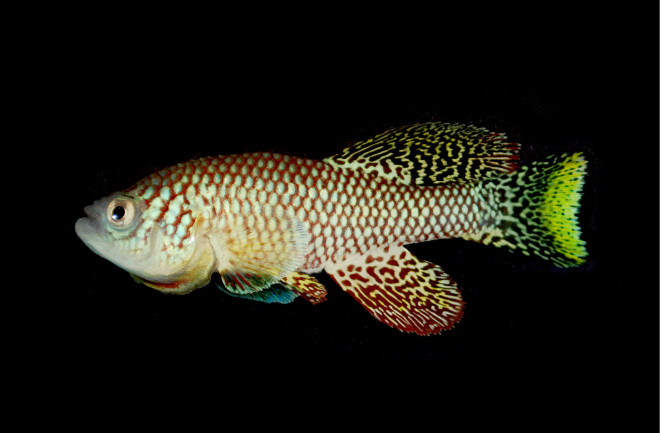 The African turquoise killifish might not live long — but, during development, it will stop growing and wait for better, wetter living conditions if it needs to.

If the pond the fish lives in dries up too much, killifish embryos can stop maturing for over six months. That pause can be even longer than their usual, uninterrupted lifespan. It appears that the fish emerge from these months relatively unscathed. Those embryos that put off growing live as long, and have as many offspring, as embryos that never pause, according to new research out in the journal Science.

“What is remarkable is the embryo’s ability to stop damage that would happen over time,” says study co-author Anne Brunet, a geneticist at Stanford University. The tiny tissues emerge in good condition and seem to have put off aging. By studying how the killifish genome changes for this months-long pause, researchers could one day prompt those alterations to preserve human organs as well.

It’s not totally clear how killifish know it is time to stop growing. Not all enter this hibernation-like freeze, Brunet says, and those that do likely receive a signal from their mothers instructing them to do so. Her team was interested in finding out what all happens inside the embryos that end up waiting out those long months. As killifish bred in Brunet’s lab, she and her team examined genetic material from embryos before, during and after their stalled growth. Some genes weren’t as active as they are normally. This makes sense, Brunet says — after all, the embryo isn’t growing. But a few genes were operating at higher-than-usual levels. Some of these highly active genes were responsible for wrapping up large chunks of the genome and effectively turning them off, an efficient process that shutters several genes at once instead of a bunch of individual pauses, Brunet says.

Other genes active during this developmental hiatus have a role in muscle development. Brunet and her team didn’t see how crucial they are for keeping the embryos healthy until they bred some of the fish with dysfunctional versions of these genes. When it came time for the growth pause, the brand-new muscle tissue in the genetically modified fish disintegrated. The team concluded that the reason these genes are normally so active in stalled embryos is because they keep those muscle cells from falling apart. “It’s not easy to maintain muscle — it’s an active process of amendment, even if the cells don’t proliferate. Without it, the muscle is no longer preserved,” Brunet says. “That’s really remarkable in hibernation.”

Brunet and her team plan to investigate how these genetic changes can lead to healthy muscle cells. In other words, what is happening with the fish's hormones or metabolism that lets the embryonic muscle cells keep developing even in stasis? Further down the line, the scientists say it might be worth investigating whether the dormant stem cells in our own bodies share any of the same pause mechanisms as killifish.

“That is very preliminary, but that is something that would be interesting,” Brunet says. “If the machinery is conserved, could that also function to preserve cells in tissues in the long term?” It will take much longer than a killifish’s frozen development to find out.