Adorable Mini-Marsupial Lion Microleo Has the Name of a Giant 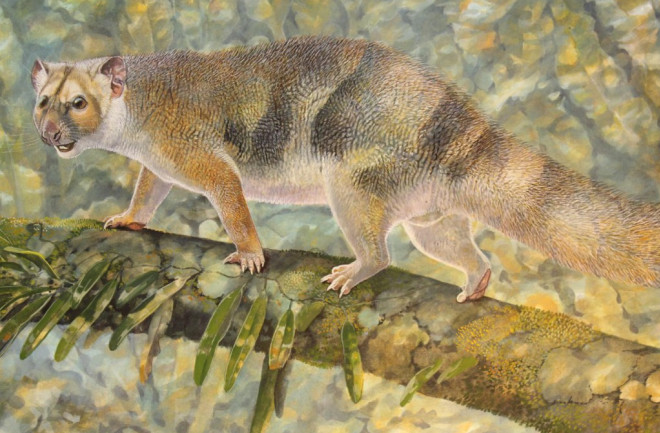 At home in the rainforest of Miocene Australia, and in our hearts, Microleo attenboroughi was a marsupial lion that weighed less than two pounds. Credit: Peter Schouten. It weighed a little more than that 20-ounce bottle of Mountain Dew on your desk and is named after one of the giants in nature broadcasting: Meet the pocket-sized marsupial lion that you wish you could have met for real 19 million years ago. Microleo attenboroughi is the latest fascinating fossil to emerge from northern Australia, which earlier this year gave us the hypercarnivore Whollydooleya tomnpatrichorum (go on, just say that name aloud. You know you want to). Researchers unearthed M. attenboroughi at the fossiliferous Riversleigh UNESCO World Heritage Site and dated the animal to about 19 million years ago, when the area was a lush rainforest. Named in honor of beloved broadcaster Sir David Attenborough (also arguably the world's most famous naturalist and, come on, the guy everyone wishes would turn up at a dinner party), this mini-marsupial got his academic debut this week in the online, open-access Palaeontologia Electronica.

While Li'l Leo is known from only fossil fragments — some teeth and skull bits — researchers have found enough to put it in the same family as Thylacoleo carnifex, which lived much later, was much larger and, as the Microleo paper puts it, had premolars "resembling a pair of bolt-cutting blades." Weighing in at a mere 21-ounces (600 grams), Microleo joins the larger marsupial lions Priscileo and Wakaleo also found in Riversleigh deposits from the Miocene period. That's intriguing because it suggests at least three marsupial lion species were around the environment at the time, each presumably occupying different ecological niches with success.

Compare four different marsupial lions of yesteryear and choose which one you'd like to meet in a dark alley. My vote goes to wee M. attenboroughi, which, along with Priscileo and Wakaleo, predates the larger, bolt-cutter-toothed Thylacoleo by millions of years. Credit: UNSW.

Microleo joins a number of other organisms living and dead that are named after Attenborough. Truth be told, this new Miocene micro-critter might just be my new favorite member of that club (a position previously occupied by the adorable Zaglossus attenboroughi, a long-beaked echidna).

Echidna baby (a puggle!) at Currumbin Wildlife Sanctuary in Australia. Credit: University of Queensland. And yes, okay, the above is not an image of Zaglossus attenboroughi — it's of an unspecified echidna species. But you get the idea. And, more to the point, I found it while looking for an image of Z. attenboroughi that I could drop in here. It's from a 2015 University of Queensland story on a program to save the long-beaked echidna. Now that you're done here, I suggest you go read it. Much like I strive to do at Dead Things, that story has got something for everyone: hope for saving an endangered species, a video for people who like moving images more than words and a description of the echidna's rather peculiar mating habits. Enjoy.