Imagine that you have been given responsibility over a tract of land. Your goal is to maintain its precious biodiversity (increasing it if at all possible), prevent the local habitats from becoming degraded and among all that, find a way to eke out a way of life. Of the many possible ways of doing this, regularly and deliberately setting fire to the local plants might be low on the list. But that's exactly what Aborigine populations in Australia have been doing for centuries and a new study shows that this counter-intuitive strategy does indeed work. 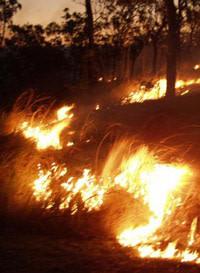 A team of American anthropologists led by Rebecca Bird at Stanford University studied the practice of "fire-stick farming" among the Martu people of Australia's Western Desert. The Martu live mostly as hunter-gatherers and supplement their food with the odd supply bought from local outstations. Their homelands are mostly dominated by sandy plains and the ubiquitous spinifex grass (Triodia) and these are the areas that the Martu start fires in.

They have different words for land at various stages of post-fire recovery: nyurma is freshly scorched earth, waru-waru describes land where shoots have started to sprout; mukura turns up after a few years when grasses, flowering shrubs and edible plants have arrived; mangul occurs a few years later still when the growing spinifex starts to outcompete edible plants, leading to kunarka when the spinifex starts to die and leaves behind sterile hollows.

The "successional stages" follow one after another in predictable ways and the Martu only ever set fire to the last two, when spinifex is dominant. In doing so, they effectively press an ecological reset button, allowing plants to return to areas that had previously been won by the unbeatable spinifex.

The burning process is an important social ritual that the Martu take great pride in and it's far from haphazard; fires are carefully ignited in areas that are upwind of known firebreaks and they are typically set during the winter season when winds are stronger and more consistent in direction. With such control, most fires burn out very quickly and it's in an individual's interest to ensure that they do so; everyone has a right to start a fire, but individuals fire-starters are accountable for any that rage out of control and damage sacred sites. .

The women set the majority of the fires and they do so to hunt for goannas (monitor lizards), pythons and skinks, which typically hide in spinifex bushes and are hard to spot. They flee from flames by digging fresh burrows and by searching for fresh tracks in the wake of the blaze, hunters can extract the lizards with a specialised digging stick.

The Martu are all too aware of the comparative ease of goanna-hunting on freshly burnt ground, but they cite many other benefits too - the practice provides more food for both people and animals (particularly large ones like kangaroos and emus) and somewhat paradoxically, it can also prevent big bushfires.

Bird's team evaluated these claims by using satellite images to analyse 34 circles of land with a radius of 3km. They found that those where the Martu would frequently set alight had a much greater degree of plant diversity than those where fires only ever erupted spontaneously, mostly due to lightning strikes. They contained more "edges", where one type of habitat gives way to another. And they contained a broader and more even range of vegetation at different successional stages, from the early collection of shoots (waru-waru) to the later dominance of spinifex (mangul).

So by carefully scorching the land, the Martu actually protect it from habitat loss and increase its biodiversity. They use fire not to destroy their environment but to rearrange it, creating a mosaic of different communities of plants at a local level. They use fire to construct their own ecosystem in a way that directly benefits them.

In 2002, Bird followed more than 150 hunting excursions and found that after burning, the hunters are able to catch about 25% more food, equivalent to an extra 400 calories per day. They also take less time to net this bounty and the chance of failure on any individual hunt falls from 22% to 4%. 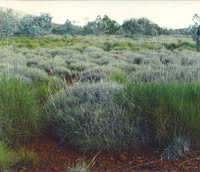 Clearing away the mature spinifex removes the hiding places that small reptiles shelter in. But it also creates a finer mosaic of different habitats that are easier to move about it, which means that hunters spend less time making their way through difficult terrain. These benefits also fall dramatically as habitats become more diverse, which makes burning a self-limiting activity. After a certain point, there's no extra worth in starting more fires and the Martu know it.

The Martu's man-made fires also help to control natural ones. Fires started by lightning strikes often sweep through vast tracts of bush and find plenty of fuel in the large areas of spinifex. But in the patchier mosaics created by the Martu, natural bushfires burn out more quickly.

That has two paradoxical consequences: the Martu don't actually subject the land to any more burning than it would normally experience, even though they actively start fires; and the spinifex actually benefit from being periodically burnt because they are less likely to be completely wiped out from local areas by large-scale bushfires.

Bird's study suggests that fire-starting, as the Martu assert, is a very effective way of managing their land. The hunter-gatherers and the local species benefit from it, the land becomes more diverse, bushfires are kept in check and most importantly, it is a self-limiting strategy with no incentives for overuse. If any party gets a raw deal, it's probably the goannas...