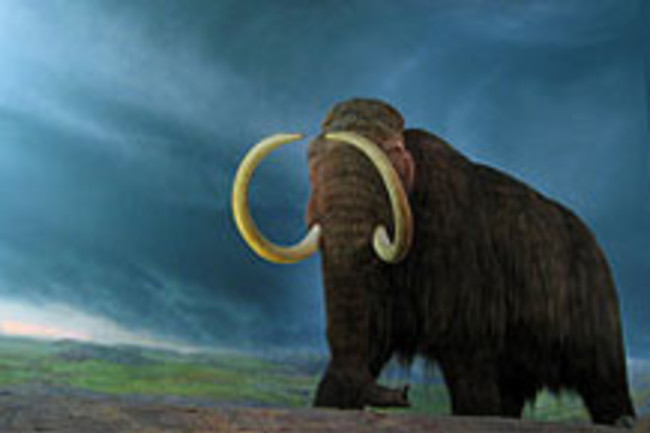 Woolly mammoths may all look the same in your average natural history museum display -- the extinct animals are always depicted with the same curly tusks, shaggy hair, and lumbering feet. But researchers have just discovered that they were not all the same, that two genetically distinct groups of mammoths roamed the Siberian plains many millennia ago, and that one group avoided extinction for an extra 30,000 years. Researchers first went in search of tufts of mammoth hair that had been frozen in the permafrost. They then used a new technique that allowed them to read the complete DNA sequence of an animal's mitochondria (an energy-producing organelle within a cell) from a single hair.

The DNA in mitochondria is passed only through the mother’s line, and doesn’t give information about changes in gene function, as nuclear DNA can. But it is useful because it doesn’t change from parent to offspring, making it easy to show when different animal groups are present [Nature News].

When they compared the DNA sequences of different animals, they realized that the two groups diverged genetically about 1 million years ago. The researchers then studied the locations where the hair tufts were found to get an idea of the animals' territories, and used carbon dating to get a rough idea of when the prehistoric beasts were plodding across Siberia. The results, published in the Proceedings of the National Academy of Sciences, show that one group stuck to a very small area of the high Arctic, and went extinct about 40,000 years ago. The second group appeared to wander much further afield, and lasted until about 10,000 years ago. Paleontologist Thomas Gilbert, one of the lead authors, says they haven't yet figured out why the second group was so much more successful, evolutionarily speaking.

“The reasoning is open to speculation right now,” Gilbert says. But, if the groups were different subspecies, “we can at least say [the first group was] not driven extinct by humans. The extinction was way before humans arrived” in this region of Siberia. This theory is of interest because many paleontologists argue that the mammoths and other large megafauna of the late Pleistocene, the last Ice Age, went extinct, in part, because of hunting pressure from humans [Science News].

So what did cause that first group of mammoths to fade away? Possibly climate change or disease, researchers say.