A Very Special Tree of Life 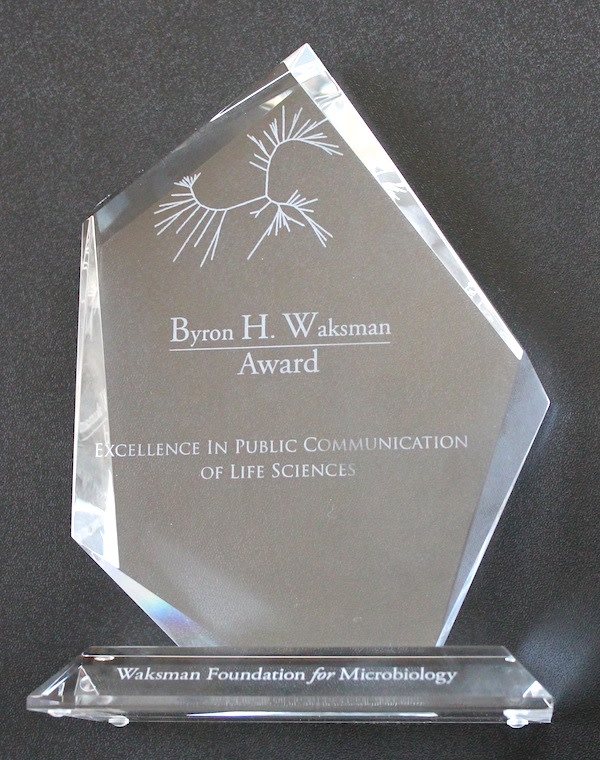 Yesterday I went to Rutgers University to give a talk about medical ecology. Afterwards, I got a delightful surprise: Amy Chen Vollmer, the president of the Waksman Foundation for Microbiology, got on stage to announce I had won the Byron H. Waksman Award for Excellence in Public Communication of Life Sciences. Byron Waksman, who passed away this June, was an immunologist who made important discoveries about auto-immune diseases and the signals white blood cells send to each other. Spreading the word about science was another of his passions; after he retired from his scientific work, he became a middle-school science teacher. Waksman was also the director of a foundation set up by his father, Selman Waksman, who won the Nobel prize for discovering many of the antibiotics we depend on today. Byron Waksman used the foundation's resources to advance the understanding of science. One of the programs he initiated brings journalists to the Marine Biology Lab in Woods Hole to learn how science is done. All the journalists I've spoken to who have gone through it have sung its praises. It shows them the real science that lies beyond the press release and the phone call. I'm hugely honored to get an award in Byron Waksman's name. And it's a particular pleasure to get an award decorated not with some non-descript humanoid, but with the Tree of Life. It's a privilege to get to jump among its branches for a living.