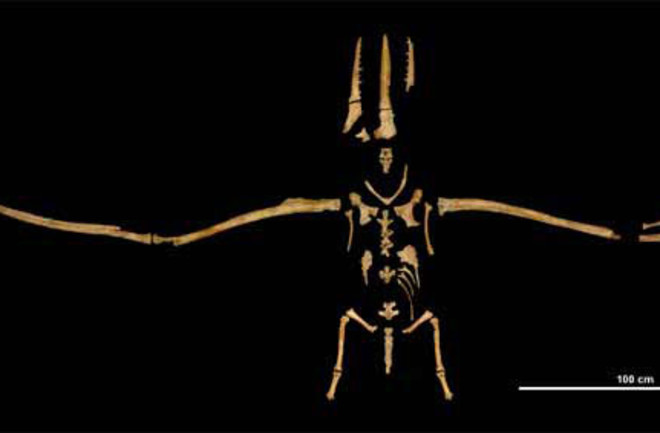 Here's a new creature for the record books. In Chile, paleontologists have found the fossilized remains of a huge, toothy bird whose wingspan stretched 17 feet across. That means the bird, Pelagornis chilensis or "huge pseudoteeth," had one of the longest wingspan ever recorded--a wingspan that was about as long as a giraffe is high. This newly named species belongs to a group known as pelagornithids, birds that had bony tooth-like projections and long beaks. The well-preserved fossil that researchers turned up belonged to a bird that weighed about 64 pounds and had relatively light, thin-walled bones, according to the description published in the Journal of Vertebrate Paleontology. It cruised the skies between 5 and 10 million years ago.

The enormous wingspan gave P. chilensis certain advantages, like the ability to travel long distances and reach areas of the open ocean thick with potential prey. The researchers think it feasted on fish and squid, and may have trolled its hunting grounds with its lower beak skimming the water until its teeth could clamp down on a wriggling meal. But lead researcher Gerald Mayr says that a 17-foot wingspan is probably close to the maximum for a flying bird.

"There are a number of drawbacks if you become so large," he added. Chicks would have to be raised over a long period of time, making them more prone to predation. "Moreover," he added, "bird feathers are quite heavy, so very large birds may have become too heavy." [Discovery News]

Mayr notes that these giants of the sky were "true birds," not winged reptiles like the pterosaurs

of the Jurassic era. He also seems a bit jealous of our early hominid ancestors, who may have caught a glimpse of P. chilensis in the flesh. Says Mayr:

"Their last representatives may have coexisted with the earliest humans in North Africa.... Bird watching in Chile would be thrilling if birds with more than 5-meter wingspans and huge pseudo-teeth were still alive." [press release]

80beats: How They Flock Together: Pigeons Obey the Pecking Order During Flight

80beats: California’s Bald Eagles Are Back! Now for the Bad News.