A Single Mutation May Have Sparked Multicellular Life 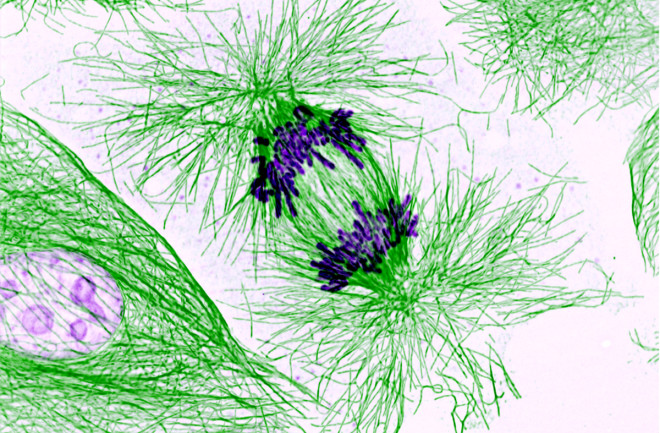 A pig cell in the process of dividing. (Credit: National Institute of General Medical Sciences) Millions of years ago, a very important change — or mistake — in our ancestors’ DNA occurred, and it may explain why we're all here. Single-celled organisms swimming through a primordial sea was what life consisted of long ago. But at some point, cells started coming together to create entities with two, ten and eventually millions, of cells. This led to the rise of organisms containing different kinds of cells, which paved the way for the creation of tissues and organs, and eventually life as we know it. Now, researchers from the University of Oregon say they’ve traced the steps of evolution backward through the phylogenetic tree and pinpointed a single mutation that they believe ushered in the transition from unicellular to multicellular organisms.

The researchers focused on an important part of cell division, or mitosis, during which two daughter cells created through cell division are placed in the proper orientation within the tissue. Protein structures, called mitotic spindles, are instrumental to this process, because they line up daughter cells with marker proteins on the cell wall. When the spindle isn’t oriented properly, malformed tissue and cancer can result. In many animals, an ancient protein controls the orientation of the spindle to ensure it ends up in the correct position. If researchers discover when these ancient protein structures evolved the ability to position spindles, the thinking goes, they could pinpoint the origin of multicellular life.

A fluorescence micrograph of a dividing choanoflagellate showing its DNA (blue) and flagella and mitotic spindle (green). Bottom: A small choanoflagellate colony with one of its cells dividing. (Credit: University of Oregon) Researchers started their detective work by looking at a class of single-celled organisms called choanoflagellates, which also happen to be the closest living unicellular relatives to animals. Choanoflagellates live in seawater and use a tail, called a flagellum, to move through their environment and find food. While each choanoflagellate is unicellular, they’ll often organize into groups to form a multi-celled colony to feed on certain foods. Multiple cells working together to accomplish a singular task is basically how our organs work today. Therefore, the researchers theorized that there had to be a genetic change somewhere along the way that let solo cells recognize each other and come together. To locate this watershed moment, researchers needed to do some molecular time traveling. Evolution in Reverse Researchers used a technique called ancestral protein reconstruction, which combines gene sequencing with computer algorithms, to peer millions of years into the past. The technique shifts evolution into reverse, and gradually narrows mutations down to a shared ancestor. Working through a chain of more than 40 organisms, they were able to discern when key mutations took place. More importantly, the technique allowed them create cells with the same DNA. With the help of these “resurrected” cells, they identified a single mutation that changed the way a certain protein functioned. They published their findings in the open-access journal eLIFE. Rather than working as enzymes, which spark reactions within a cell, the altered proteins became what's known as an interaction domain. In other words, the proteins could communicate with and link to other proteins, which is an important skill for cells that want to work together rather than go it alone. Today, this crucial protein domain is present in all animal genomes and is put to work every time a cell divides, something that happens millions of times a day.

“This mutation is one small change that dramatically altered the protein’s function, allowing it to perform a completely different task” says Ken Prehoda, a study co-author and biochemist at the University of Oregon. "You could say that animals really like these proteins because there are now over 70 of them inside of us." The team's findings could also lead to new insights about cancer and other diseases. Cancer cells, Prehoda explains, are essentially lone wolves that decided to stop communicating with cells in your body and start misbehaving. Understanding how cells communicate with each other in the first place could someday help us understand why they stop. Sometimes a small change can truly have enormous consequences.