A Single Mutation Made It Easier to Ride Horses 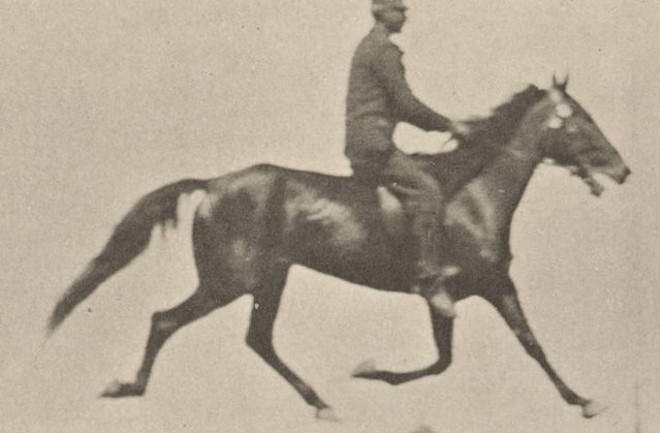 This 19th-century image shows a horse pacing. Note that the legs on each side move at the same time. (Credit: USC Digital Library/Wikimedia Commons) Horses normally move about in one of three ways: they walk, trot or gallop. The middle gait, the trot, is a horse's Goldilocks stride — not so fast that it gets tired, but not so slow that it gets left in the dust. Unfortunately for the humans that like to ride on horses' backs, the trot is a pretty uncomfortable gait. During a trot, a horse will lift two legs at a time in diagonal pairs, alternating sets as it goes. This is a very economical motion for the horse, as it requires little extraneous compensation to stay balanced. If you happen to be sitting astride that horse, however, it feels more like riding in a truck with no shocks over a backcountry road — bouncy only begins to describe it.

To compensate, most riders develop a kind of rolling motion that smoothes the ride out, but a full day on horseback results in burning legs and an aching back. For this reason, horses that have developed a special kind of gait in place of the trot are highly prized. Called the amble, and only seen in some breeds, this four-beat stride involves moving both legs on the same side at one time, as opposed to diagonally. Horses that amble, called gaited horses, can move at the same speeds as other horses, but do so without the ceaseless up-and-down of their trotting counterparts. Back in 2012, researchers from Sweden tied the amble to a very specific region of the genome, a single nucleotide to be exact. They found that a mutation of the DMRT3 gene altered the way that a horse trots, shifting its gait from the diagonal-pair trot to the same-side amble. After studying the mutation in mice, they think that the gene controls the development of the spinal cord in a region responsible for limb locomotion. Mice with the mutation exhibited a longer stride length, something that in horses could serve to change the pattern of their footfalls.

Now, a team of researchers from the Leibniz Institute for Zoo and Wildlife Research, some of whom contributed to the 2012 study, says it's found where this mutation came from. The researchers analyzed DNA from 90 ancient horses dating to over 5,000 years ago, and found the first instance of the mutation occurred in two horses from the York Archaeological Collection, dated to between 850 and 900 A.D. The horses originated in medieval England, they say, and were likely taken to Iceland by the Vikings, where they were interbred to produce a population of the gaited variety. From there, these superior comfortable horses spread across Europe, resulting in the wide distribution and diversity of gaits evident today. They published their findings Monday in the journal Current Biology. The researchers think that the explosion of horses with this particular mutation so soon after it appeared is good evidence of our own species meddling in the horses evolution. Today, horse breeds ranging from the North American Saddlebred to the Indian Kathiawari possess the ability to amble. Gaited horses possessed a new and valuable trait, leading us to preferably breed them and artificially select for a particular mutation. It is not clear if the new type of stride offers any natural evolutionary advantage to the horses, besides making them better suited for our own needs.