A "Sadistic" Spider's Unusual Mating Habits Are Tough on the Female 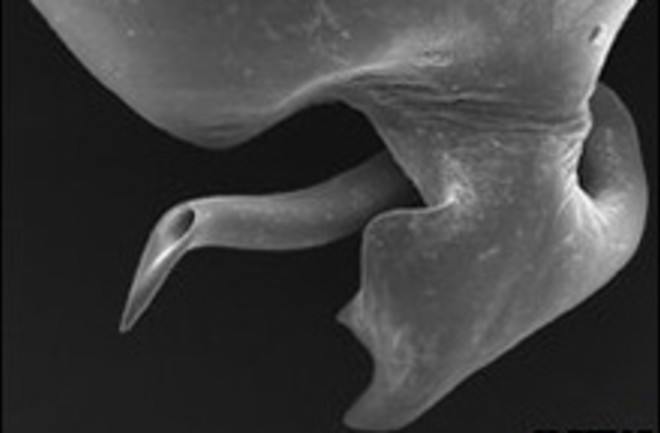 Males of the spider species Harpactea sadistica have a violent way of increasing their odds of reproductive success. In the midst of a mating tussle, the male stabs his spiked copulatory organ (pictured) into the abdomen of the female, in order to deposit his sperm directly into the female’s ovaries.

This process, known as traumatic insemination, is common among many hermaphrodite species as well as some insects with separate sexes, most famously the bed bug. But it has never before been observed in other arthropods. “Now we have a very odd biological phenomenon in an unrelated taxonomic group…. It’s like finding a peacock’s tail in a non-bird species” [The Scientist], says Mike Siva-Jothy, who has observed the behavior in bed bugs.

In the study, published in the Proceedings of the Royal Society B, the researchers explain that female spiders have a structure called a spermatheca that stores sperm until an egg is ready to be fertilized. Typically, male spiders insert their sperm into that receptacle. However, the spermatheca is a “last in, first out” structure, so that if any further males inseminate a female, the last mate’s sperm is the first in line to fertilise an egg [BBC News]. By bypassing the spermatheca all together, the H. sadistica male can ensure that his sperm gets to the egg, and won’t be bumped by later suitors. But the researchers did not try to determine how this unusual mating system affected the females.

Researchers note that the parallel evolution of this malevolent mating tactic in insects, arachnids, and other taxonomic groups shows that traumatic insemination is more than just an oddball zoological curiosity. Rather, it could be an important driving force in the evolution of mating systems across diverse taxonomic groups…. “It’s a dramatic male adaptation to sperm competition, basically” [The Scientist], says evolutionary biologist Goran Arnqvist, who was not involved in the current spider research.