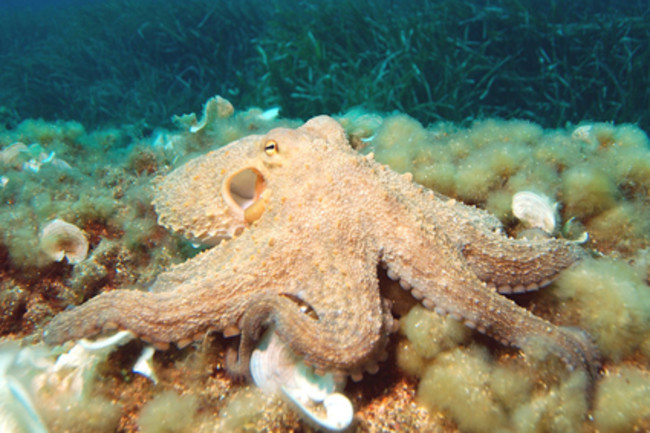 Humans, for the most part, are either right-handed or left handed. But how do you find out if an eight-armed creature has a preferred limb? You give it a Rubik's Cube. Today, marine biologists from Sea Life Centres, a group of aquatic attractions scattered across Europe, will begin a month-long observation of the octopus' grabbing habits. By throwing toys—including Rubik's Cubes—and food into the tank, the researchers hope to see whether octopuses favor one arm or one side of their body when reaching for things, or whether they are in fact "octidextrous" and have no preference. Aquarium visitors can help the research, too. Signs posted next to the tanks show a diagram of the octopus with each of its eight appendages labeled, and the biologists want visitors to write down which limb they see the sea creature use to clutch its food or its toy. The researcher team, led by Claire Little, thinks the octopus probably prefers one arm over the others, and if they can figure out which one, they can make its life a little easier by only feeding it on its comfortable side. According to Little, octopuses are "very susceptible to stress," so anything that makes life easier for them is good, even feeding them on their favorite side. And though the octopus is one of the most intelligent invertebrates around, here's hoping they don't solve the Rubik's Cube, just so those of us who wasted countless car trips on the multicolored puzzle and never figured it out don't have to feel even worse.