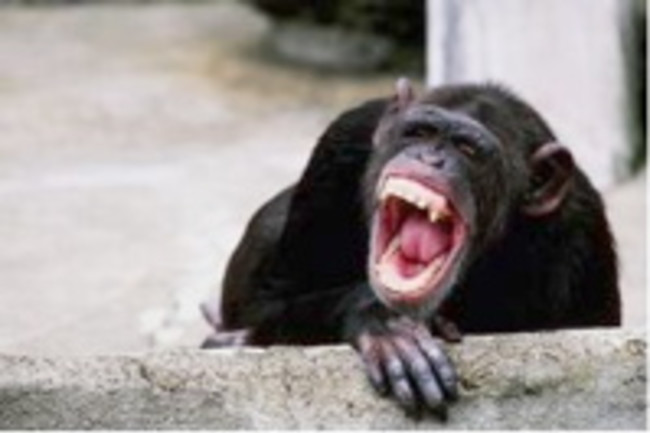 There have been some interesting new developments in the study of the evolution of language. The idea that human language emerged from hand gestures rather than sounds has been getting very popular in recent years. Some scientists think that certain neurons in the brain played a crucial role in this gestural prehistory. Known as mirror neurons, they simulate the movement of other people's hands, among other things. In the October 14 issue of Science, a team of scientists showed that mirror neurons are even more sophisticated than previously thought. They even speculate that some mirror neurons could have helped give rise to different components of sentences, such as subjects and verbs. One reason that this gestural theory has gained ground is that it hasn't been clear that the sounds of apes refer to particular things. Random outbursts aren't a particular good foundation for building up language. But don't rule out the sounds just yet. In the journal Current Biology, primatologists have shown that when chimpanzees make noises known as "rough grunts," different grunts signify different things. We're still at the very early stages of this sort of research, and I wouldn't be surprise if future work shows that there's not an either/or choice when it comes to the precursor of full-blown language. I've written a piece about all this for a special section of Forbes.com about communication. It's great company to be in, with articles and interviews from the likes of Steven Pinker, James Suroweicki, and Arthur C. Clarke. While I'm on the subject of the evolution of language, a non-biological step forward has occurred over at Language Log, a popular blog about linguistics. They've taken on my brother Ben Zimmer as a regular contributor. Here's his latest, on the wordplay on the new Steven Colbert show on Comedy Central.