A recipe for growing bigger hearts, found in the blood of pythons 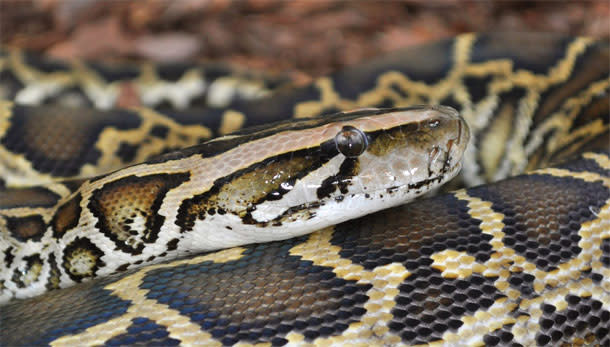 In comic books, many superheroes have gained extraordinary powers after being transfused with the (often modified or irradiated) blood of animals. But, as so often happens, life proves stranger than fiction. At the University of Colorado, Boulder, a group of mice have grown bigger hearts after scientists injected them a chemical cocktail, inspired by the blood of pythons. When the situation demands it, the muscles of mammal hearts grow larger and pump more vigorously. That’s useful for pregnant women who need to pump for two, toddlers who need to fuel their rapid growth, or athletes who need to power their regularly exercise. But growing hearts can also be bad news if they’re triggered by genetic disorders, high blood pressure or heart attacks. These situations can cause “hypertrophic cardiomyopathy”, where the heart’s thickening walls force it to work harder to pump blood. To understand how hearts get bigger, Cecilia Riquelme turned to an animal whose heart swells in size every time it eats – the Burmese python. Pythons can swallow extremely large prey like pigs or deer, and they remodel their organs to cope with their meals. Their intestines and liver nearly double in size. As, as Stephen Secor discovered in the 90s, their hearts become 40 percent bigger in just two to three days. For comparison, most mammal hearts only become 10 to 20 percent bigger after months of exercise. 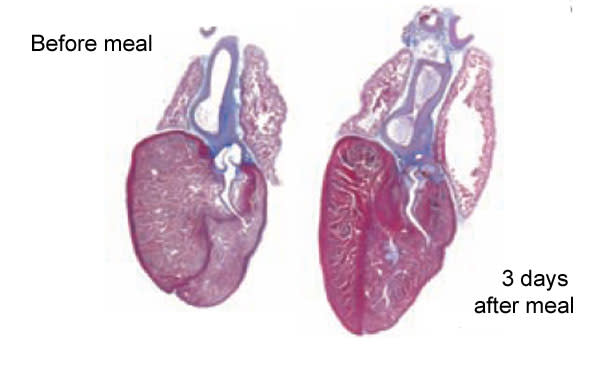 The python’s swollen heart is proportionately mighty. Its vigorous pumping sends oxygen coursing through the snake’s bloodstream, allowing it to up its metabolism by 44 times. Its cells produce more proteins that strip electrons from food molecules and shunt them onto oxygen, producing water and liberating energy. Its blood vessels fill with 52 times the usual level of triglycerides, substances found in fats and oils. Such levels would clog mammal hearts with fat, but the pythons seem immune. These changes turn the snake into a long, supercharged energy-extracting machine Riquelme discovered that there is something in the python’s blood that triggers the transformation. Working with Secor's team at the University of Alabama, she exposed rat heart cells to plasma from the blood of pythons that had just been fed. They grew in size. Could a protein be responsible? Riquelme used either heat or digestive enzymes to destroy the proteins in the python plasma, but it still managed to engorge the rat cells. Not a protein; something else. The mystery ingredients turned out to be fats. The blood of fasted and fed pythons contained very different blends of fatty acids, and the team identified three that are particularly important – myristic acid, palmitic acid and palmitoleic acid. Well-fed pythons have lots of all three fats, balanced at a very specific ratio. When Secor mixed up this cocktail and injected it into a fasting python, the snake’s heart grew as if it had just eaten a big meal. This trick isn’t restricted to pythons. The same fatty acid cocktail also increased the size of mouse hearts within a week. The effects were very specific – the cocktail didn’t affect the size of the rodents’ other muscles or livers. The enlarged hearts showed no signs of clumps of fat, or fibrosis – a condition that stiffens the heart and accompanies disease. The implications are intriguing. Might it one day be possible to give someone the heart of an athlete by administering the right combination of python-inspired fatty acids? “That is the hope, but we are not advocating that people take pills instead of exercising,” says Leslie Leinwand, who led the study. “We are hoping first to show that these fatty acids might be beneficial in the setting of heart disease and it is a long way off to humans from here.” Reference: Riquelme, Magda, Harrison, Wall, Marr, Secor & Leinwand. 2011.Fatty Acids Identified in the Burmese Python Promote Beneficial Cardiac Growth. Science http://dx.doi.org/10.1126/science.1210558Image copyright of Stephen Secor