A remarkably well-preserved soil sample leads researchers to believe the frozen continent was once home to a swampy ecosystem. 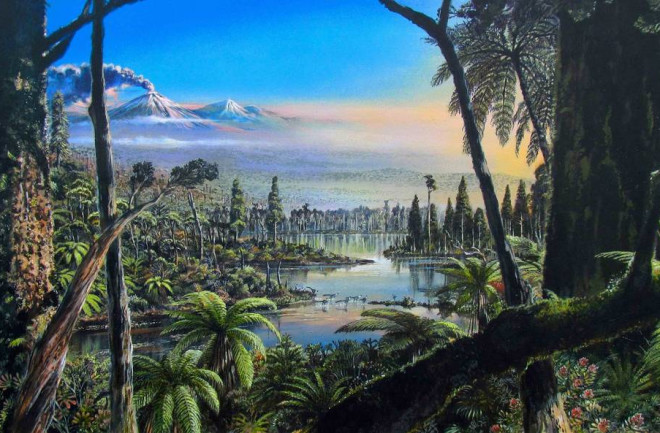 Hidden beneath Antarctic ice lies evidence of an ancient swampy rainforest that sprawled far before humans roamed the Earth. Researchers were unaware an ecosystem of this nature ever existed on the frozen continent — that is, until one team got a closer look at the decayed plant matter dug out from under ice and hoisted aboard an expedition ship.

Dating back 83 million to 92 million years, the prehistoric soil is strangely well preserved. “If you were to go to a forest close to your house and dig a hole several feet in the ground, it would look like this sample,” says Johann Klages, a geologist with the Alfred Wegener Institute for Polar and Marine Research in Germany who helped author a recent paper on the findings.

The soil reveals a range of plant life that flourished in what researchers think was a waterlogged and humid ecosystem. Published this week in Nature, the findings suggest that during the hottest period in the last 140 million years, Earth wasn’t just too warm to support ice at the South Pole. Instead, the planet boasted a rainforest similar to those in New Zealand today.

In 2017, when Klages and his colleagues were aboard the RV Polarstern German icebreaker in Antarctica, they weren’t sure what they were digging for. Previous examinations of the seafloor revealed a strange substance lying beneath a bed of sandstone. “We assumed that something old must be present there,” Klages says.

One extraction pulled up a canister of black, dirtlike material, which Klages says was a strange find. If this material was as old as the research team thought it was, it normally would have turned to coal by now. “No one had ever seen anything like that, so we decided not to open [the canister] onboard,” he says. “It would have been too risky to the material.”

Later, X-ray scans of the material showed networks of preserved roots. That kicked off a flurry of experimentation with “every kind of geoscientific method we could imagine,” Klages says.

The team determined that their hunch was correct: The sample dated to the mid-Cretaceous, or peak dinosaur era. Though the roots were decomposing into coal and couldn’t be assigned to a species, other parts of the sample that came from plants revealed relatives of today’s ferns and conifer trees.

It’s hard to know exactly which species thrived in this era and place, since the way researchers construct past ecosystems is by comparing them to modern species. The plant species that existed millions of years ago don’t exist today in Antarctica. “There’s no analogue — we have no temperate rainforests at [the latitude of] 82 degrees south,” Klages says.

Ancient Antarctica would have had to be much warmer to support these moisture-loving plants. Hints of particular bacteria species, combined with the pollen samples, suggest that for this life to be supported, the forest had to have reached 68 degrees Fahrenheit in the summer, Klages says. And silty, fine deposits recovered from the dirt could only have settled and accumulated preserved plant life if this rainforest’s water had been slow-moving or stagnant.

The broader interpretations about what this find could mean for our understanding of ancient Earth came to light after Klages knocked on the door of a paleoclimatologist. With the data from this dirt sample, the researchers were able to model what kinds of atmospheric conditions would have been around globally if this rainforest were to exist during the Cretaceous.

The simulation supports a warmer world than researchers previously envisioned, and a higher carbon dioxide concentration, too. Researchers thought this ancient, dinosaur-dominated era boasted CO2 levels about 2.5 times greater than our levels today. This simulation suggests levels were as much as four times the CO2 we currently have.

The team plans to keep exploring what this ancient environment must have been like. Antarctica sees four months of almost total darkness every year. What else the planet needed to keep life thriving at its southernmost point — without sunlight — is still a mystery.

But these questions wouldn’t have sprung up if it weren’t for the sample that Klages and his colleagues found, thanks to the right mix of factors. “You need logistics, knowledge, and a lot of luck,” Klages says.