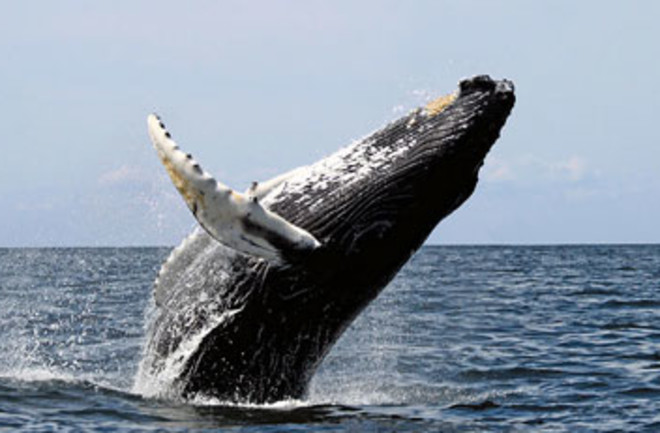 The fight against global warming has a brand new weapon: whale poop. Scientists from the Australian Antarctic Division have found that whale poop contains huge amounts of iron and when it is released into the waters, the iron-rich feces become food for phytoplankton. Phytoplankton absorbs carbon dioxide from the air, the algae is in turn eaten by Antarctic krill, and baleen whales eat the krill. Through this neat cycle, globe-warming CO2 is kept sequestered in the ocean. Scientists have long known that iron is necessary to sustain phytoplankton growth in the oceans, which is why one geoengineering scheme calls for adding soluble iron to ocean waters to encourage the growth of carbon-trapping algae blooms. While environmentalists have fretted over the possible consequences of meddling with ocean chemistry that way, this new study on whale poop suggests an all-natural way to get the same carbon-trapping effect: Increase the number of whales in the ocean. When Stephen Nicol of the Australian Antarctic Division analyzed the feces of baleen whales, he found an astounding amount of iron in it. New Scientist reports:

Nicol's team analyzed 27 samples of faeces from four species of baleen whales. He found that on average whale faeces had 10 million times as much iron as Antarctic seawater.

"Allowing the great whales to recover will allow the system to slowly reset itself," he says. And this will ultimately increase the amount of CO2 that the Southern Ocean can sequester.

David Raubenheimer, a marine biologist who wasn't involved in the current study, told New Scientist that the findings are important.

They highlight a specific ecological role for whales in the oceans "other than their charisma", he says.