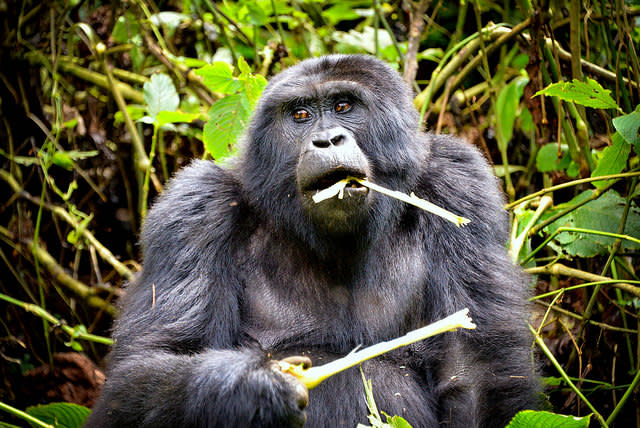 In the mountains of Central Africa, scientists who study critically endangered gorillas have a new tool. They've discovered that they can learn what viruses gorillas are carrying by stealthily collecting half-chewed plants the apes leave behind. If this sounds reminiscent of that class clown at the third-grade lunch table who would ask if you liked seafood and then say "See? Food!" and open his mouth wide to display his sloppy Joe slurry, don't worry—mountain gorillas are vegetarians. And researchers aren't looking inside the animals' mouths. They decided to search gorillas' plant scraps for viruses exactly because they don't want to get too close. Tierra Smiley Evans, of the "Gorilla Doctors" at UC Davis, and her coauthors explain that the existing ways to check gorillas for viruses aren't great. Scientists can take blood from the animals, or swab their mouths or rectums. But these procedures require trapping an animal and knocking it out. Since there are fewer than 900 members of this gorilla subspecies living in the wild, scientists would prefer to bother the animals as little as possible. Other options include collecting feces or urine from gorillas. But this is tricky too, because it requires following gorillas both day and night and noticing exactly where they relieve themselves. Between 2012 and 2013, the researchers observed gorilla families in the Virunga population. (One of two wild populations of mountain gorillas, these animals live in an area spanning parts of Uganda, Rwanda and the Democratic Republic of Congo.) Guides who are very familiar with the gorillas were able to identify the individuals. Researchers watched from a distance while gorillas ate, then collected plant parts the animals left behind. They looked especially for anything with saliva or teeth marks on it. Then they packed the bits of stems, leaves and roots in liquid nitrogen to take back to the lab. The team ended up with 383 plant samples from 294 gorillas of all ages. The most common samples came from a vine called Urera, which gorillas like to eat just the outside layer of. Another popular plant was wild celery; gorillas use their teeth to scrape out the tasty inner part of a stalk, then discard the rest. The scientists also collected chewed plant samples from 18 golden monkeys, another primate species that lives in the area, for comparison. In the lab, researchers analyzed the samples for genetic material. They found DNA from gorilla herpesviruses in 42 percent of the gorilla plant samples. These viruses often live in a host without making the animal sick. They didn't find any of the several respiratory viruses they checked for—which wasn't surprising, the authors write, because none of the gorillas looked sick. The researchers also checked their samples for something called simian foamy virus. This common virus uses RNA to carry its genes, rather than DNA. They didn't find any simian foamy virus in the gorilla samples, but they did find some in 2 of the 15 golden monkey samples. This suggests that it's also possible to find RNA-based viruses using this technique—although maybe it doesn't work as well for gorillas. Overall, the see-food method seemed to be a good one. Researchers could learn about the viruses their primate subjects were carrying, and they didn't have to get too close or harass the animals. The method could be especially important for this population of mountain gorillas, the researchers write, because the animals live in close proximity to humans. Between tourism, scientific research, and dense human populations in the surrounding areas, the Virunga mountain gorillas have plenty of chances to get exposed to human viruses—which may infect gorillas too. Studying the gorillas' saliva-covered table scraps might be a good (only slightly gross) way to help keep them safe.