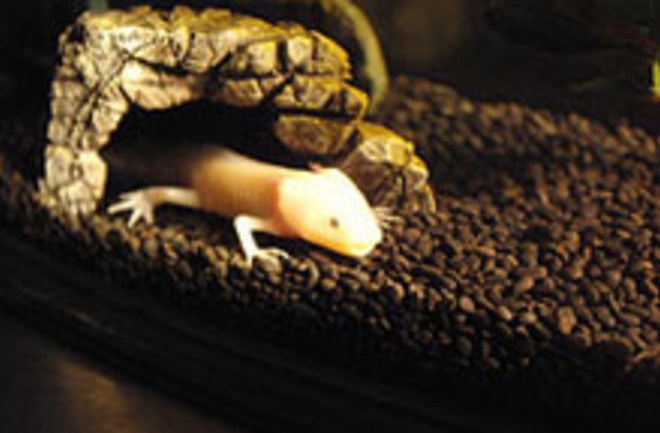 The question of how salamanders regenerate their legs when amputated is an ancient one that dates back to the days of Aristotle. Now scientists have come one step closer to solving the mystery.

Contrary to what researchers previously believed, when a salamander's legs are removed the cells near the amputation site revert to adult stem cells, but do not become pluripotent, or capable of developing into any body part.

That explains why a salamander who loses a tail doesn't regrow a leg in its place. In the study, published in Nature, scientists explain that when a salamander's limb is amputated, the muscle, bone, and skin cells at the amputation site change into a clump of adult stem cells called a blastema. Before this experiment, researchers had hypothesized that these undifferentiated blastema cells — which all look identical — are pluripotent and thus able to form many different cells types. But it was not clear how the original cells from adult tissue were reprogrammed, or how the blastema cells went on to form the correct tissue types [Nature News].

To determine how cells give rise to a regrown limb, scientists first inserted a snippet of DNA into the genome of a salamander called an axolotl, which caused it to produce a glowing green protein. From the eggs of these glowing salamanders, they then removed the cells that would eventually develop into legs.

Next they removed the future leg-cells of a normal salamander embryo, and implanted in their place the cells that would produce glowing legs--when these formerly normal salamander developed, they had fluorescent limbs. Finally, the researchers amputated their salamanders’ legs, which then regrew.

Cells in the new legs also contained the fluorescent protein and glowed under a microscope so the scientists could watch blastemas form and legs regrow in cell-by-cell detail. Contrary to expectation, skin cells that joined the blastema later divided into skin cells. Muscle became muscle. Cartilage became cartilage. Only cells from just beneath the skin could become more than one cell type [Wired.com].

Scientists have studied salamanders for some time in the hopes of developing ways to regenerate human limbs, and this study may alter the direction of such investigations. The results "really shift the focus" of regenerative research, [regeneration biologist Andras Simon] said. Instead of trying to generate multipotent or pluripotent cells, "one should try to understand how these cells get the appropriate signals to make a new limb in terms of organizing the different tissue types" [The Scientist].

Still, although the study offers valuable information about how regeneration works in one organism, additional research is necessary. For example, scientists must first learn to control the development of blastema cells before trying any new techniques on humans.

80beats: Stem Cells May Eventually Replace Needles for Some Diabetics

More From Discover
The Sciences
How Do Dogs Sniff Out Diseases?
Technology
Marijuana Breathalyzers Are on the Road to Becoming Reality
Health
Someday, a Robot Might Draw Your Blood
Health
Researchers Are Getting Closer to Making Medical Robots That Can Swim In Your Bloodstream
Health
Artificial Wombs: How Sci-Fi Could (One Day) Meet the NICU
Technology
Microfluidics: The Tiny, Beautiful Tech Hidden All Around You
Recommendations From Our Store
My Science ShopCosmos: Possible Worlds
My Science ShopStrange Science
My Science ShopEinstein's Universe
My Science ShopElements Flashcards
Shop Now
Stay Curious
Join
Our List