A Mesmerizing View of Earth From Space

An animation of satellite imagery shows the ebb and flow of weather systems over nearly an entire month — including one of the most damaging storms on record in the Southern Hemisphere. 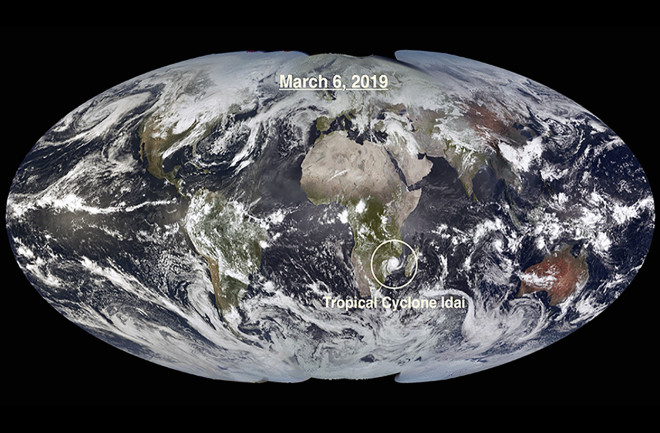 A screenshot from an animation of satellite images showing a global view of weather systems on March 6, 2019 — including Tropical Cyclone Idai, one of the Southern Hemisphere’s most damaging storms. See below for the full animation. (Credit: Cooperative Institute for Meteorological Satellite Studies)

There are all manner of beautiful satellite views of Earth. But how can you view the entire face of our spherical planet — all 360 degrees of it — in one frame, and in beautiful natural colors?

Not only that, but how can you do it in a movie covering every day for nearly an entire month?

Rick Kohrs at the University of Wisconsin’s Space Science and Engineering Center has managed to do just that. And I think the result is truly mesmerizing.

Imagery acquired by several geostationary satellites was knitted together to create this animation. (Credit: Cooperative Institute for Meteorological Satellite Studies)

To create the animation, Kohrs knitted together visible and near-infrared image data acquired by several geostationary satellites between March 6 and April 4, 2019. The result is the animation above, consisting of one knitted composite image for each day.

In the animation, you can watch weather systems evolving over time as they move through the atmosphere. Among them are a number of tropical cyclones. In the screenshot at the top of this post, I highlighted one of these: Tropical Cyclone Idai.

The image on the left shows the extent of electric lighting across Beira, Mozambique, on March 9, 2019, a typical night before Tropical Cyclone Idai made landfall there. The image on the right shows the scene on March 24, 2019, three days after Idai had passed. The difference in lighting dramatizes the wide extent of power outages. (Credit: NASA)

The storm made landfall in Beira, Mozambique’s second-largest port city, on March 14, 2019. Moving slowly through Mozambique, Malawi and Zimbabwe, Idai dumped huge amounts of rain, in many cases over low-lying land. That, combined with poor housing and other infrastructure, made Idai one of the Southern Hemisphere's deadliest storms on record.

Beira, a city of 530,000 people, was one of the worst affected areas. The storm was reported to have destroyed 90 percent of the city.

The beauty of the animation and the devastation caused by that one storm make for an unsettling juxtaposition.